Reddick told NBCSN’s Kelli Stavast that he still wasn’t satisfied with his No. 9 Chevrolet for long green-flag stints.

“We’ll go to work overnight and come up with a game plan for tomorrow’s race, because we’re going to see some more of that,” the JR Motorsports driver said.

Click here for speeds from the final Xfinity practice Friday.

Click here for speeds from the first Xfinity practice at Las Vegas.

The rookie posted a speed of 118.442 mph around the .75-mile track, leading a top five that had only one Cup driver, Ty Dillon.

FORT WORTH, Texas – Blake Koch, a Xfinity Chase participant, will go to a backup car after being involved in a hard crash early in the first Xfinity Series practice at Texas Motor Speedway

Koch, who is third in the Chase standings, was on his first lap of the session when his No. 11 Chevrolet and shot it into the Turn 2 wall. Koch said over the radio that “something broke.”

The wrecked car was brand new for this weekend. The backup car most recently was his backup at Charlotte Motor Speedway.

Koch drives for Kaulig Racing, a one-car team in its first season of Xfinity competition. The team is part of a technical alliance with Richard Childress Racing.

Bowman and the No. 88 Chevrolet for JR Motorsports had a speed of 152.304 mph when the session was red flagged for rain with about 45 minutes left. 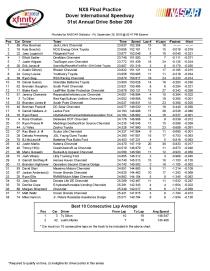