Editor’s note: From December 20th through December 31st, NASCAR Talk has recapped the best of the best in NASCAR’s three premier series with our season-in-review driver capsules.

In case you missed any in the series, here’s your chance to read all of them in one sitting. Here’s the:

Click on each name to read that respective driver’s 2017 Season in Review capsule: 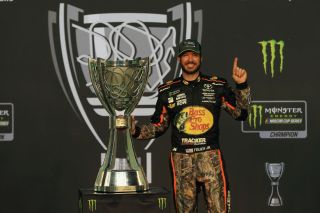 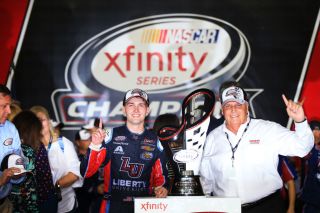 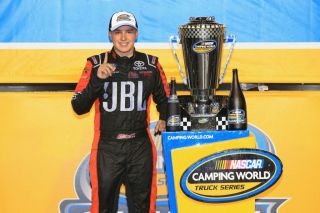 WHAT WENT RIGHT: Byron continued to establish himself as one of the most promising young stars in NASCAR racing. He had stiff competition, but still managed to hold off his top challengers to win the Xfinity championship. His inherent talent and success – he’s earned a combined 11 wins between the Xfinity Series and Truck Series in 2016 and 2017 – led to him being promoted to the NASCAR Cup series in 2018, replacing Kasey Kahne.

WHAT WENT WRONG: It’s hard to pick much of anything wrong for Byron, who won both the Xfinity championship and also Rookie of the Year. However, there were a couple of glitches during the season. First, he crashed out in back-to-back races in the spring at Richmond (30th) and Talladega (36th). His only other 30th or worst finish was due to a faulty transmission at Chicago.

WHAT TO EXPECT IN 2018: After strong performances in 2016 in a Truck and 2017 in an Xfinity car, the 20-year-old Byron is now in NASCAR’s highest echelon in 2018. Even with his immense talent, don’t be surprised to see him have rookie struggles at time in a Cup car, particularly early in the season as he starts to get his sea legs under himself, so to speak. Then again, some observers predict Byron has the ability and chops to surprise a lot and potentially far exceed initial expectations by many. Does that mean he could reach the Championship 4 round his first time out? We wouldn’t be surprised at all if that happens.

The NASCAR season officially came to a close Saturday night in Charlotte, North Carolina, with the annual Xfinity and Camping World Truck Series Awards at the Charlotte Convention Center. The ceremony will air at 9 p.m. ET on Dec. 17 on NBCSN.

Xfinity driver William Byron and Truck Series driver Christopher Bell were recognized as this season’s champions before they move on with their careers. Byron will race in the Cup Series for Hendrick Motorsports and Bell moves up to Xfinity with Joe Gibbs Racing.

NASCAR handed out plenty of annual awards for each series.

JR Motorsports’ Elliott Sadler was voted most popular driver for the third time after he finished runner-up in the season standings to Byron.

"Winning the @NASCAR_XFINITY Most Popular Driver award for the third time in my career is truly one of the coolest things I’ve been able to do in this sport. You, the fans, make this possible. I’m grateful and humbled by this honor." — @Elliott_Sadler on his 2017 MPD award. pic.twitter.com/ujO2WdxNiP

Brad Keselowski Racing’s Chase Briscoe was voted most popular driver in the Truck Series, though there was a slight mixup with his name on the trophy. We’ve all been there.

Congrats to the winner of most popular driver, it was a close race between Chase “Brisco” and I but he just barely edged me out! Congrats to him 😂 pic.twitter.com/0QWnFlwchm

Here are more sights from the award ceremony brought to you by social media.

Our champion has some new bling! pic.twitter.com/GLjtGItE6o

It was great to celebrate the 2017 @NASCAR_XFINITY Series Owners’ Championship with Roger Penske at the series banquet in Charlotte. pic.twitter.com/VILnzg55Qm

Stage Time: @ChaseBriscoe5 accepts his @SunocoRacing Rookie of the Year award and #NASCARMPD trophy while @AustinCindric reflects on his championship run and the team he had behind him. pic.twitter.com/ELl1kJQLco

It was arguably one of the most difficult pills Elliott Sadler has ever had to swallow.

Just when it appeared he might finally capture his first career NASCAR championship in Saturday’s Xfinity Series title race, Sadler found himself held up by Ryan Preece, who was racing for the car owner’s title for Joe Gibbs Racing but was not involved in the race for the driver championship.

Preece was running the high line and kept Sadler from getting by him. Sadler tried everything he could to pass Preece, even putting his bumper into the back of Preece’s Toyota to get him to move over.

But that contact ultimately wound up costing Sadler one last chance to catch William Byron, who went on to win the Xfinity championship in his first year in the series.

Sadler, meanwhile, finished second for the second consecutive year — and the fourth time in the last seven seasons.

On Monday’s NASCAR America, analysts Dale Jarrett and Parker Kligerman broke down what happened to Sadler and whether Preece played a part in preventing Sadler from winning the title.

Here’s how Jarrett looked at it:

“I understand the frustration from Elliott Sadler with a driver that really’s not involved in anything. Ryan Preece is an outstanding young driver that made a name for himself. … I think they gave him bad information and put this young man in a very difficult situation. He wasn’t going to catch the 22 car at that point in time. It was really time for him to get out of the way of the two drivers battling for the championship.

“Unfortunately, his name is going to be associated with affecting the championship in this way. It’s part of it, he doesn’t have to pull out of the way, it’s up to Elliott to figure out a way to get around him.”

And here’s how Kligerman analyzed things:

“I completely understand Elliott Sadler’s frustrations. He had a chance to win the championship, he was in the front and felt like not being able to accomplish that pass on Ryan Preece and maybe get a little help there.

“But it’s not like Ryan stuck it out there, he was beside him and it just didn’t work out. And as they got together, I felt Ryan was running the same line he had been running, and that was Elliott trying to make a last-ditch effort.

“… He’s racing to have a job, to have a career in this sport, like Elliott Sadler. He told me after the race he was upset because he was an Elliott Sadler fan his whole life. He grew up watching Elliott Sadler. He did not want to be part of the championship discussion but was trying to do his job, doing what Joe Gibbs Racing told him to do, which was to try to beat the 22 for the owner’s title.

“I know why Elliott is upset, it’s the fourth time he’s finished second, but I don’t think Ryan did anything wrong.”

Catch more of what Parker and DJ had to say in the video above.

And speaking of William Byron, check out what our two analysts had to say about his championship in the video below.

After 200 laps Saturday at Homestead-Miami Speedway, William Byron claimed the Xfinity Series championship in his rookie year by finishing third in the Ford EcoBoost 300.

He finished ahead of his JR Motorsports teammates, Elliott Sadler and Justin Allgaier, and Richard Childress Racing’s Daniel Hemric.

Watch the above video for Byron’s first interview as a NASCAR champion.

Below are interviews with the remaining Championship 4 drivers.

Sadler placed eighth in the race after contact with Ryan Preece with less than 10 laps to go cut a tire on his No. 1 Chevrolet. It Sadler’s fourth runner-up result in the points in his Xfinity career.

Allgaier finished 12th in the race after struggling for most 300-mile event. He was competing without his primary crew chief, who had been suspended for the race. Chad Knaus, the seven-time champion crew chief in the Cup Series with Jimmie Johnson, helped out on the pit box for the No. 7 Chevrolet.

Hemric finished last among the Championship 4 drivers in 34th after his No. 21 Chevrolet experienced battery problems early in Stage 2. Hemric spent 12 laps on pit road before returning to the race.

Here’s everything you need to know about Xfinity Series playoff opener at Kentucky September 21, 2017 4:15 pm