NASCAR On NBC analyst AJ Allmendinger will climb back behind the wheel for the August 3 NASCAR Xfinity Series race at Watkins Glen International.

Allmendinger will pilot the No. 10 Chevrolet for Kaulig Racing for the second time this season.

Allmendinger is a past winner at Watkins Glen, having won the 2014 Cup race there. He has 10 prior Cup starts at the upstate New York road course, with the win, three top-five and six top-10 finishes, plus one pole.

He also has competed in one Xfinity race at Watkins Glen, starting fourth and finishing second for GMS Racing last year.

“It’s an honor to be able to compete for Kaulig Racing at one of my favorite tracks, Watkins Glen International,” Allmendinger said in a team release. “I’ve been fortunate enough to win there in the Cup Series and had a strong run finishing second last season in my only Xfinity start there.

“Matt Kaulig, Chris Rice and all of the guys made Daytona so enjoyable and fun, I can’t wait to get to The Glen.”

Allmendinger raced for Kaulig Racing two weeks ago in the Circle K Firecracker 250 at Daytona International Speedway on July 5, leading 33 laps and finishing third before the car was disqualified for failing post-race inspection, leaving Allmendinger with a last-place finish in the 38-car field.

It wasn’t until Chase Elliott scored his first Cup victory last season that crew chief Alan Gustafson saw the toll that not winning took on his driver.

With high expectations and a large fan following, pressure built on Elliott as his winless drought stretched beyond his rookie year in 2016, then 2017 and past the halfway mark of 2018.

Elliott scored eight career runner-up finishes before that first victory in August. He went on to win twice more last year (Dover and Kansas in the playoffs).

Those performances showed the growth Elliott has made since his rookie Cup campaign in 2016.

“I guess the best way to describe it,” Gustafson said, “is I can remember when I first worked with him, he was so good at such a young age. ‘Where is his ceiling?’ He seems to be awfully close to it to me. Then kind of a pleasant surprise to me, he’s been able to push that ceiling, he’s made some significant growth and improvement.

“I think it stems from going to these races … knowing what line works. What line is good for this or how did this guy win the race … all these little nuances that you get from experience.”

“I am 100 percent confident if we give Chase a car that he wants, he will win the race with it,” Gustafson said. “He can adapt really well and there hasn’t been anything that he has not been able to overcome.”

2. Will IndyCar knowledge help Chevy thrive in Cup in ’19?

There are so many questions entering this season with what the racing will be like under the new rules package. Some questions will start to be answered at next week’s organizational test at Las Vegas Motor Speedway, but even then there will be much uncertainty.

For Chevrolet, this could be daunting after its struggles last  year. The car manufacturer won four races a year ago — its lowest total since 1982 — and last had a car race for the Cup title in Miami in 2016.

Pat Suhy, Chevrolet’s NASCAR Group Manager, notes how the manufacturer’s IndyCar program could help its NASCAR teams with this rules package that has tapered spacers reducing horsepower and downforce added to the cars.

“We’ve been able to take a lot of what we’ve learned in IndyCar, where you are power limited,” Suhy told NBC Sports. “If you look at last year and really years past, we just piled on as much downforce as we could and you would always go faster, but when you’re power limited with the tapered (spacer) 550 (horsepower) engine, when you’re power limited, you have to start making decisions about how much drag you’re willing to accept for a downforce gain. It’s really more about trading off straightaway speed for cornering speed.

“We’re in a really good position to help answer that question with some of the tools that we have developed and used week in and week out in the IndyCar Series. We’ve been able to bring that to our NASCAR teams.”

Car No. 1 will be used for wind tunnel testing. Car Nos. 2-3 will debut at Atlanta Motor Speedway. Cope said the organization plans to have new cars for all the races through Texas, which is the seventh race of the season.

Why build their own chassis?

“Part of it is you control your own innovation and destiny and when parts are coming,” Cope said. “We control our own production schedule. I think it’s going to work out fine.”

4. Chatting with the new guy

Clint Bowyer admits he didn’t know Daniel Suarez well before Suarez signed to drive the No. 41 Ford at Stewart-Haas Racing starting this season. A recent sponsor appearance together in Texas gave them the chance to talk on the flight.

“Man, it’s fun to be around kids like that are full of talent, full of piss and vinegar,” Bowyer said. “He’s set on kill. He’s excited about his opportunity, as he should be. He’s in good equipment. I know the equipment he’s going to be sitting in, the team that he’s going to be with. They were on fire last year with Billy Scott and all those guys. He’s got a good future ahead of him for this year. I’m excited for him.”

5. Fans in the Cup garage

Details are being finalized, but look for the Cup garage to be open to fans at a select time on some race weekends. This has been done in the Xfinity and Truck Series and will expand to Cup this season.

How tracks offer this to fans, how many fans will be allowed in, what time and what day this will take place on a race weekend will be set by tracks and NASCAR.

A spokesperson for Daytona International Speedway told NBC Sports that track officials are developing their plans for this and don’t have anything to announce at this time.

Pit strategies have determined the finish in countless NASCAR races over the years.

But Sunday’s I Love New York 355 at Watkins Glen International was one that ran the gamut of pit strategies, with most playing out wrong, while one ultimately played out right for race-winner Martin Truex Jr.

Crew chief Cole Pearn had Truex save fuel for the better part of the final 15 laps. While Truex was dismayed that so many other cars would pass him during that stretch, Pearn’s call was spot-on. And in just a matter of moments, Truex went from dismayed to overjoyed.

Pit strategy for Ryan Blaney didn’t work, as he ran out of fuel with two laps left in the race (finished eighth).

Meanwhile, Brad Keselowski hoped to make it to the finish but realized with two laps he was going to come up short. Ergo, enter pit road for a splash and go (finished 15th).

Ditto for pole-sitter Kyle Busch, who also had to pit late when it appeared he wouldn’t have enough fuel to make it to the finish (finished seventh).

WATKINS GLEN, N.Y. – Why are Matt Kenseth, Kurt Busch and Kasey Kahne without confirmed Cup rides next season despite their sterling resumes?

It essentially comes down to money, Dale Earnhardt Jr. said Saturday in one of the most insightful and revelatory answers yet about a tumultuous season of driver movement in NASCAR’s premier series.

“You’ve got a guy who you think has got a lot of talent, very young, a lot of potential and a veteran who is established but he wants three, four, five, six times the amount of money,” Earnhardt said between practices at Watkins Glen International. “I mean, you’re going to go with a younger guy because it’s a better deal financially. That’s something that I think is transitioning in the sport. It took a while, but when we had our major reset when the recession hit and the value of everything changed, the trickle-down effect is coming through the drivers’ contracts and making a big difference into the decisions these owners are making.

Despite the availability of Kenseth, the 2003 champion with 38 career victories, Hendrick Motorsports recently announced relatively inexperienced Alex Bowman as the replacement for Earnhardt, who is retiring after the 2017 season.

Cup rookie Erik Jones is replacing Kenseth at Joe Gibbs Racing, and Hendrick still is mulling whether to keep Kahne after his Brickyard 400 win (Xfinity Series rookie William Byron is a candidate to fill the No. 5 Chevrolet). Busch’s status for next year is unclear after Stewart-Haas Racing declined to pick up the option on his contract.

After the introduction of team charters last year altered how teams’ revenue streams from NASCAR work, drivers’ contracts were reworked in a way that became more driven by purses (which haven’t been made public since last year) than base salary.

The new wave of young drivers consequently are signing for far less guaranteed money than veterans whose deals began before the charter system, Earnhardt said.

“You’ve got a lot of young guys coming in being offered and accepting contracts that are a fifth to a 10th of what veterans are getting paid,” he said. “And that’s money that can go into the team. These sponsors aren’t giving teams the money that they used to, so the owners, everybody’s got to take a little cut. Everybody’s got to dial it back. Everybody’s got to realize they have to accept some of that fallback and difference. That’s the same with the drivers’ contracts.

At NASCAR’s peak sponsorship climate in the mid-2000s, a driver salary could comprise as much as 40 percent of a championship-caliber team’s budget (which typically ranged from $20 to $30 million annually).

Earnhardt, who is a co-owner of the JR Motorsports team in the Xfinity Series, said it’s a positive that driver salaries are being reset because more money will flow into team coffers and make the business more sustainable.

“Drivers are having to understand that change is coming down the pipe,” he said. “If it haven’t happened to ‘em yet, it’s going to happen to them. And the young guys, they don’t know any better. They’re taking a nickel to race. They’re taking whatever they can get. That’s a good change for the owners. Somewhere in a quote years ago, I admitted to being overpaid, but I wasn’t going to complain.

“That’s a shift that’s going to be better for the sport. Get those salaries in a realistic range for how much money that we have from corporate America. All those things have to change, driver salaries included.”

WATKINS GLEN, N.Y. — Pole-sitter Carl Edwards has the pit stall closest to pit exit for Sunday’s Cheez-It 355 at The Glen.

Drivers with an opening either before or after their pit stalls at Watkins Glen International are Denny Hamlin, Tony Stewart, Ryan Newman, Kyle Busch and Jamie McMurray.

Unlike at most tracks, drivers will enter the pits at Watkins Glen International with the right side of their cars facing the pit wall. 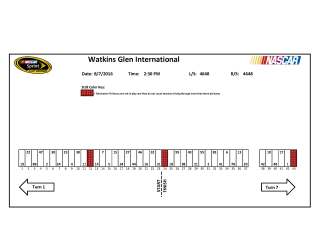