After passing Kyle Busch for the lead with 16 laps to go, Brad Keselowski went on to win the Xfinity Series race at Richmond Raceway.

It is Keselowski’s second Xfinity win of the year and 36th of his career.

“(Busch) is a great racer and when you can race with him you know you’re having a good day, especially in this series,” Keselowski told NBCSN. “We kind of hung with him and got those long runs and right at the end I was able to pounce.”

In his last Xfinity race of the season, Busch led 182 of the 250 laps before Keselowski overtook him for the last time.

“He had a better long-run car, every time, every run he was able to get by us after 50, 45 laps, whatever it was,” Busch told NBCSN. “We were working each other pretty hard there earlier in the run. I thought I beat his tires up, but he was able to come back up through there.”

With only three cautions, two at the end of stages, only nine cars finished on the lead lap.

Keselowski won with backup crew chief Brian Wilson because Greg Erwin was suspended after the No. 22 failed post-race inspection at Darlington last week.

WHO HAD A GOOD DAY: Dale Earnhardt Jr. finished ninth in his second and final Xfinity start of the year. He was the last car on the lead lap … Christopher Bell finished sixth in his first Xfinity start at Richmond … Cole Custer finished 14th and clinched a spot in the playoffs … Matt Tifft placed 13th and also clinched a playoff spot … Jeremy Clements assured himself a top 20 points finish and clinched a playoff spot after finishing 16th … Ty Dillon’s third-place finish is his best result of the year in 21 starts.

WHO HAD A BAD DAY: Bobby Earnhardt, making his first Xfinity start, caused the only non-stage ending caution when he blew a tire and hit the wall on Lap 53. He continued and finished 34th … Brandon Jones spun from contact with Ross Chastain on the last lap of Stage 1. He finished 23rd … Brendan Gaughan finished 21st, two laps down.

NOTABLE: Keselowski’s four wins at Richmond are his most at any track in the Xfinity Series … Brian Wilson is the sixth crew chief Keselowski has won with in Xfinity.

QUOTE OF THE NIGHT: “I knew Kyle (Busch) wasn’t going to just let me have it so I had to force something there. Whenever you make a pass for the lead and the win by going three-wide it is really damn cool.” – Brad Keselowski on his winning pass of Kyle Busch.

For the second year in a row, Kyle Busch will start from the pole in the Xfinity Series Virginia 529 College Savings 250 at Richmond International Raceway.

Busch, the defending race winner also, scored the pole with a speed of 122.073 mph.

Points leader Chris Buescher will start 13th when the race starts at 7:30 pm ET on NBCSN. 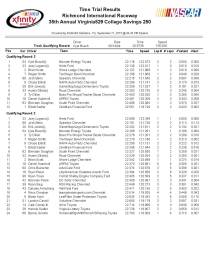 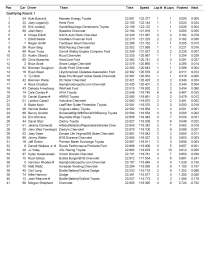