The Kyle Petty Charity Ride Across America announced Monday that this year’s tour has been postponed until 2021 due to the COVID-19 pandemic.

The ride will still follow the same route, visit the same scheduled stops and maintain the same participating sponsors as previously announced.

“Throughout the ever changing and dynamic COVID-19 pandemic, our utmost concern has always been and always will be the health and safety of our riders, team and fans,” Kyle Petty, a NBC Sports racing analyst, said in a press release. “While it saddens me that we must postpone this year’s Ride, I know in my heart that this is what’s best for everyone involved. And I can guarantee that we will keep our promise to bring the exact plans for our 26th Anniversary Ride to life in 2021 and continue our mission to raise funds to send kids to Victory Junction!”

The Charity Ride raises money for Victory Junction – a camp dedicated to providing life-changing camping experiences for children with chronic and serious medical illnesses. It has served as the Ride’s primary beneficiary since its establishment by Petty and his family in 2004 in honor of his late son, Adam.

On May 3, NBC Sports analyst Kyle Petty and 250 fellow motorcycle riders embarked from Seattle, Washington, on a nearly 3,700-mile route, the longest in its history. They traveled through 11 states in nine days before ending in Key Largo, Florida.

Funds were gathered from fans along the route, as part of the Ride’s “Small Change, Big Impact” program, as well as donations made by generous sponsors, organizations, and the riders themselves.

In addition to the $1.7 million raised by the Ride, a $2 million donation was presented to the Kyle Petty Charity Ride Trust by the Andreas family in honor of a Charity Rider, the late David Andreas. The Trust was established by the Ride in 2015 to fund Victory Junction in perpetuity.

“This year’s Ride was amazing! We had beautiful views, crowds at every stop, police escorts the entire trip, a little rain, fun visits with Victory Junction campers, great food and lots of laughs with friends for nine straight days,” Petty said in a press release. “When you get 250 people together that care about kids, want to help others and love to ride motorcycles, it’s going to be fun! Riding corner to corner across America just made it more special.”

Since 1995, 8,650 riders have logged more than 12.4 million cumulative motorcycle miles and raised $18.5 million for Victory Junction and other children’s charities. 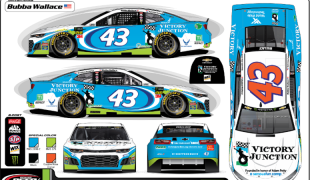 For the first time in seven years, the Kyle Petty Charity Ride Across America will traverse the East Coast as it raises money for the Victory Junction camp.

The camp, located in Randleman, North Carolina, is dedicated to providing life-changing camping experiences for children with chronic or life-threatening illnesses.

Last year the ride raised $1.3 million and sent 100 children to the camp, which has served as the ride’s primary beneficiary since its establishment by Petty and his family in 2004 in honor of his late son, Adam.

This year’s campaign marks the 24th anniversary of the charity ride and will feature 225 riders traveling 1,200 miles over seven days.

The journey – called the “Americana Tour” – begins May 5 in Portland, Maine, and ends May 11 in Greensboro, North Carolina.

“We heard the requests of both our riders and fans, and we’re excited to deliver a special route full of incredible surprises and experiences, like riding through Shenandoah National Park – which will be the 13th national park visited on the Ride,” Kyle Petty said in a release. “We’ll also be ending the Ride at Camp this year, which always brings everything full circle. Year after year, all the miles we travel are for the kids at Victory Junction. They’re the reason we ride.”

The trip will include visits to New Hampshire Motor Speedway and Pocono Raceway, the hallowed grounds of Woodstock, tours of the Martin Guitar Factory, Harley-Davidson Factory and Petty Museum and a visit to Manheim Pennsylvania, the world’s largest auto auction.

Manheim is the presenting sponsor of the ride.

Keep up with Petty and the Ride on social media at the following accounts:

The Kyle Petty Charity Ride Across America raised $1.3 million, the most since 2008, event organizers announced Tuesday.

Funds benefit Victory Junction, a camp dedicated to children with chronic or life-threatening illnesses. Since the charity ride began in 1995, more than 8,000 children have attended the camp at no cost.

The charity ride, hosted by NASCAR on NBC analyst and former Cup driver Kyle Petty, started May 13 from Portland, Oregon, and a week later in Milwaukee, Wisconsin. The charity ride featured 200 bikers.

“This might be my 23rd year leading the Ride, but the overwhelming support we receive from fans in local towns across America just never ceases to impress me and we’re so grateful for that,” said Petty in a statement. “We had a very special welcome in Ten Sleep, Wyoming, where an entire K-12 school came out to greet us, and unforgettable receptions in Walla Walla, Washington, and in Mitchell, South Dakota. Not to mention the support from small towns like Kooskia, Idaho, and Raymond and Darwin, Minnesota.”

This charity ride surpassed last year’s total funds by $300,000. Funds were gathered from fans along the route, along with donations from sponsors, organizations and riders.

“We couldn’t do what we do without the support of our loyal sponsors, and this year we were fortunate enough to visit our friends at Manheim Portland, Manheim Minneapolis, WinCraft Inc. and Harley- Davidson,” said Petty. “Not only did these companies make generous contributions to our cause, but they also made an extra special effort to provide our riders with great food, live music, activities and more.”

Since 1995, more than 8,175 riders traveled more than 11.9 million cumulative miles and raised $18 million for Victory Junction and other children’s charities. Victory Junction has served as the charity ride’s main beneficiary since its establishment by Petty and his family in 2004 in honor of his late son, Adam.

Petty talked about the ride during an episode of the NASCAR on NBC podcast last month.