TALLADEGA, Ala. – Korbin Forrister was fastest in final practice for the Camping World Truck Series at Talladega Superspeedway with a lap of 187.956 mph.

There were three Chase drivers in the top five.

Hemric and Nemechek enter the fred’s 250 outside of a transfer spot in the Chase.

Click here to see the speeds from final CWTS practice

The veteran NASCAR driver enjoyed the first off-weekend of the off-season by taking part in some quality family time.

But it also meant racing time, too, as Kvapil took sons Carson (12 years old) and Caden (turns 9 on Dec. 10) out to do some testing on Sunday.

And proud papa took to Twitter to do some well-deserved bragging.

Had a fun couple hours with the boys testing. Carson made his first laps in a Legend car pic.twitter.com/nwg25RVVd5

And Caden made his first laps on asphalt in a Bandolero. Good times! pic.twitter.com/0PJrII79Bb

NASCAR announced Wednesday night that Kyle Busch and Matt Kenseth each will be docked 15 minutes of practice time next week at Darlington Raceway for inspection issues at Bristol Motor Speedway. They were among 11 Sprint Cup teams issued warnings.

Warnings were given to:

NASCAR recently streamlined its warning structure. NASCAR’s Rule Book states that for every fourth warning a team receives in a season it will result in the loss of pit selection. Warnings can not be appealed.

Kyle Busch, who has won the past two series races, is entered. Ryan Blaney, who finished second to Busch last weekend at Michigan, also is entered.

Updates: Ryan Ellis will drive in the No. 1 Chevrolet and Travis Kvapil will drive the No. 50 Chevrolet. 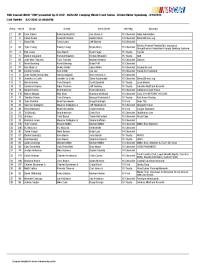 Johnny Milton Terry was sentenced to 10 years probation and fined $1,000 plus court costs Monday after pleading no contest in the February theft of the pickup truck and the trailer that contained a NASCAR Sprint Cup car.

Team Xtreme reported that the vehicle and trailer with the car Travis Kvapil was to have raced at Atlanta Motor Speedway were stolen from a Drury Inn parking lot in Morrow, Ga., on Feb. 27. The vehicles were recovered the next day but the team was unable to compete in that weekend’s race.

A report by the Morrow Police Department stated Terry confessed to the crime a day after the theft and that person contacted police.

An arrest warrant was issued on March 6. Terry was later arrested and had bond denied June 29.

As part of Monday’s plea deal in Clayton County (Ga.) Superior Court, Terry was sentenced under the First Offender/Conditional Discharge program despite being jailed four times from 2001-11, according to the Georgia Department of Corrections.

The Morrow Police Department report stated that a criminal history check on Terry returned “several entering autos/theft by receiving stolen property and is a convicted felon.’’

NASCAR explains why Kentucky qualifying was canceled July 13, 2015 9:35 am