And with Martin Truex Jr.’s wreck on Lap 28, Harvick, who finished fourth, opens up a 53-point lead over second-ranked Truex and a 57-point edge over Joey Logano. Jimmie Johnson, 70 points back, moved up one spot to fourth.

Ryan Newman gained two places, from 16th to 14th. Race winner Kyle Busch was the only other driver to gain two spots, from 39th to 37th. Busch is now 136 points out of 30th place (Cole Whitt). He must finish the first 26 races within the top 30 to make the Chase for the Sprint Cup.

Carl Edwards, who won this race last season, dropped the most in the standings, from 14th to 17th. 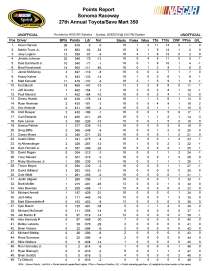 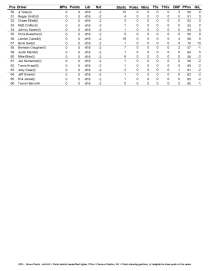 In his second full-time season on the Sprint Cup circuit, it looked like Kyle Larson was starting to fall victim to NASCAR’s notorious sophomore jinx.

It’s no wonder he was mired in 22nd place in the Sprint Cup standings heading into Sunday’s FedEx 400 Benefiting Autism Speaks at Dover International Speedway.

But Larson’s season-best third-place finish at Dover could be the start of the turnaround he’s been seeking.

“It was a really good run for us, first top three of the year, first real kind of solid finish of the year,” said Larson, who climbed two spots in the Cup standings as a result, from 22nd to 20th. “I’m proud of my guys for the job they did to rebound from last week (25th in the Coca-Cola 600) to bring a better car to the racetrack.

“That was just a nice solid day. We ran in the top 10 for most of it. We got off there at the midpoint of the race and got back going decent. Just caught the right lines it seemed like most of those last restarts. I’m happy with the finish, and we will go to Pocono next week, a track I enjoy and hopefully we can do well there, too.”

Larson rallied in the closing laps to pass Martin Truex Jr. and Kasey Kahne. He thought he may have had one last shot to reach runner-up Kevin Harvick but trying to overtake race winner Jimmie Johnson wasn’t in the cards, Larson said.

“I figured it would be tough to have a shot at Jimmie,” he said. “I knew Kevin was on older tires than I was, so I was hoping to get a good run on him as we took off (on the final restart with two laps left in the green-white-checkered finish) and maybe I could time it to get to his outside into (Turn) 1.

“But he had a pretty good start, and he almost got to Jimmie’s outside there. I was pretty surprised about that. It was going to be tough to get either of them, I think, because even though they had older tires than I did, I felt like they kind of evened themselves out there after cycles and decent run there, the run before that last one.”

Larson is one of the most aggressive drivers on the Sprint Cup circuit for a variety of reasons.

Among the most significant is his long history racing sprint cars on dirt tracks, and his willingness to throw his car into the wall if need be to get an advantage, a strong apprenticeship that convinced team owner Chip Ganassi to put the then 21-year-old Larson in a Sprint Cup car full time last season.

Of course, Juan Pablo Montoya’s departure from the No. 42 team after the 2013 season also played a significant role in Larson’s elevation upward to NASCAR’s premier series, as well.

Now with the confidence and momentum he gained in Sunday’s third place, Larson is hopeful of bigger and better things to come.

“It was our first good run of the year and hopefully we’ll have many more,” Larson said. “Hopefully this will kind of transition into some momentum for us, for our team, and we can start getting some more top-five and top-10 finishes.”