Shell will go with a Red Cross-inspired red-and-white look on Logano’s car next week in the regular-season finale at Richmond Raceway in hopes to draw more attention to those affected by Hurricane Harvey.

The American Red Cross is accepting donations on its website (www.redcross.org). You can text HARVEY to 90999 to donate $10 to the cause or go to https://joeyloganofoundation.com/donate-now/ to make your donation through the Joey Logano Foundation. All proceeds donated through JLF for the next 30 days will go to the American Red Cross Hurricane Harvey disaster relief fund.

“Our roots run extremely deep in Houston and we are committed to doing our part to help the city move on in the aftermath of Harvey,” said Bruce Culpepper, Shell U.S. President, in a statement. “Shell employs nearly 20,000 people in the U.S. and nearly half of them are being directly impacted by Harvey.”

“Houston and the Texas Gulf Coast have suffered a disaster of historic size – one that is going to take months if not years of recovery,” said Logano in a statement. “In the last couple of days, we have seen sports icons and organizations step up for Texas and the Gulf Coast. With our strong ties to Shell and the community, we wanted to rally the passionate NASCAR base for this cause as well.”

Here is a look at the car Logano will run at Richmond. 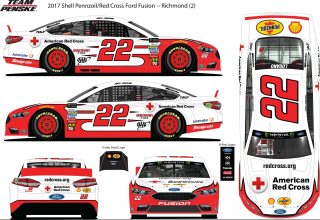 DAYTONA BEACH, Fla. — Joey Logano, crew chief Todd Gordon and sponsor Shell all have extended their contracts with Team Penske for 2022 and beyond, the team announced Friday at Daytona International Speedway.

The announcement marks the second consecutive day that a NASCAR team has announced a driver and sponsor contract extension. Joe Gibbs Racing revealed Thursday that it had signed Denny Hamlin and sponsor FedEx to a multi-year extension.

Logano’s contract was set to expire after the 2018 season, team owner Roger Penske confirmed. The extension is a play on Logano’s car number (22). Team officials declined to say how much beyond 2022 the contracts go. Penske said that Shell would be the primary sponsor for more than 30 races a season on Logano’s car.

Logano, the 2015 Daytona 500 champion, won the Clash on Sunday to begin Speedweeks at Daytona International Speedway. He has 15 Cup victories since joining Team Penske in 2013 and has never finished worse than eighth in the points during that time. Twice he’s gone to the season finale in Miami with a chance to win the championship, finishing a second last year.

Penske said that the long-term commitments announced Friday are “a priority for me.

“I want long-term commitments and people want them from us,’’ Penske said. “It’s the same thing with the drivers. I think a driver with a solid ride for a long time, it’s all he’s going to worry about rather than ‘Is my deal up?’ and then you get all this commotion around the driver. It’s a real calming effect.’’

Penske confirmed that Brad Keselowski’s contact is set to expire after this season but that they’re working on an extension.

Penske and Shell executives touted the deal in how it helps Penske’s businesses, including Penske Truck Leasing and the Penske Automotive Group, while also helps Shell extend its footprint.

“It gave us a chance to combine the business side,’’ Penske said.

Said Istvan Kapitany, Executive Vice President, Shell Global Retail, of the deal: “What is so exciting about the Penske relationship with Shell is the strategic nature of it and also the fact that it is a global opportunity for both of us to grow together. In Shell, we do believe in long-term strategic partnerships. Ferrari is a partner with us for more than 60 years. We believe with Penske we found the partner who can be with us at least for 60 years.’’

“We can formulate the oil to suit the vehicle and to suit the engines and it’s a wonderful test track for us with formulation development,’’ he said. “We have scientists working literally week by week looking at the performance of the engine and the performance of the oil, even changing the oil during the season to try to get some more horsepower. It’s almost like a live laboratory to test products.’’