NASCAR announced the change today in a memo it sent out to teams.

The memo, sent by Senior Vice President of Competition Scott Miller, dictates how teams will be penalized if drivers exceed the speed limit.

• If a competitor exceeds pit road speed exiting onto the track, the vehicle must return to pit road before being eligible to post a qualifying time.

• If a competitor exceeds pit road speed returning to pit road the time/or times posted on that run will be disallowed.

The pit road speed at Auto Club Speedway is 55 mph.

In the below video from Las Vegas, you can see multiple cars creep toward the end of pit road before launching simultaneously once the clock reaches 1:20 left. Clint Bowyer narrowly avoids running into the back of Ty Dillon.

Withing with one fewer team member because of a new limit reducing pit crews from six to five, teams are experimenting with various ways to change four tires.

While crews figure out how to execute pit stops as quickly as possible, they’re also having to deal with new pit guns, not all of which worked Sunday at Atlanta Motor Speedway.

On NASCAR America, analysts Jeff Burton and Steve Letarte took a look at the different pit crew strategies teams are trying and compared them with last year. There were three distinct strategies examined:

–The front-tire changer also carrying a tire (employed by the teams of Kevin Harvick and Kurt Busch).

–A tire carrier lugging both tires to the right side of the car (used by Brad Keselowski‘s crew).

At Atlanta, Harvick’s race-winning team used two tire changers, a jack man, the fuel man and one tire carrier on the rear. The front-tire changer also carried a tire and got help from the jack man.

“I think probably the thought process in that is, ‘Let’s speed up the rear up so it’s as close to the front as possible,'” Burton said.

Letarte highlighted the unique strategy of Keselowski’s team having one carrier with both tires.

“This tire carrier has about 150 pounds of tires in his hands, 75 pounds each,” Letarte said. “You have to have a strong, agile crew member.”

No matter the strategy, pit stops already have improved in two races.

“These pit stops have picked up almost 2 seconds, just from Daytona to Atlanta,” Letarte said.

Watch the video above for more on the different pit stop styles.

Below, Burton and Letarte discuss the various cost saving initiatives NASCAR has introduced this season.

NASCAR has released the pit road and pace car speeds for all the tracks the three national series will compete at in 2018.

The only change from the 2017 season is the addition of the Charlotte Motor Speedway road course, which will have lower speeds than for the normal races on the oval.

One year after just one speeding penalty was issued in the NASCAR Cup Series race at Atlanta Motor Speedway, 13 were handed out to teams in Sunday’s race. One ended Kevin Harvick‘s dominating race performance and allowed Brad Keselowski to slip through for the win.

In the middle of the season, NASCAR added additional timing lines on pit road at all of its tracks. Sunday was the first time teams had raced at Atlanta with those extra timing lines.

“It’s simply time over distance,” Letarte said. “The smaller the distance, the harder it is for a driver to correct a mistake or a hard driving car.” 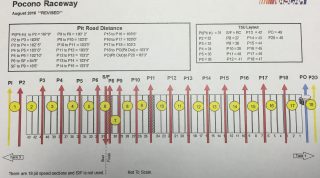