Joey Logano is back to his winning ways and the backing Team Penske gives him is a major contributor to his success. NASCAR America takes a look at Logano’s career with Penske and how they’ve aided in his triumph. 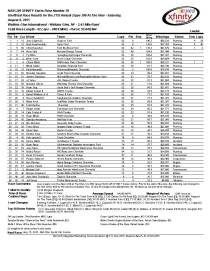 Be it ever so humble, there’s no place like home for Leavine Family Racing.

The single-car Sprint Cup team has resumed operations this week after completing the move back into its Concord, N.C., shop, which was severely damaged by a fire in early May.

The cause of the fire, which destroyed four race cars and other equipment, as well as more than 3,000 square feet of the interior of the building, remains under investigation.

The team had spent the last two months working out of the Penske Racing in nearby Mooresville, N.C.

.@walr2772 & crew back at LFR shop. Long process but good to be back. Thank you all for the support #HomeSweetHome pic.twitter.com/TKMrwJt7F3

To celebrate its move back to home base, the team announced a new partnership with Monitronics Security, which will install a new security and fire monitoring system at LFR.

Monitronics will also serve as an associate sponsor on the team’s No. 95 Ford Fusion in upcoming Sprint Cup races at Chicago, Charlotte and Texas.

“We are thrilled that Monitronics has offered to help us as we move back in and continue operations in our shop in Concord,” team owner Bob Leavine said in a media release. “The fire was certainly a setback for our team, but we saw significant support from the NASCAR community – including our partners and fans.”

The one-car Sprint Cup team hopes to return to its race shop in Concord, N.C., after the July 11 race at Kentucky, driver Michael McDowell told LastCar.com this past weekend at Sonoma Raceway.

That will come just over two months since the team’s 20,000-square foot race shop was heavily damaged by fire May 8.

The team has worked out of Penske Racing’s headquarters in nearby Mooresville, N.C., since the fire.

Four of the team’s 12 race cars were damaged or destroyed in the fire. The cause of the fire is still under investigation, crew chief Wally Rogers told SiriusXM NASCAR Radio on Sunday.

The team competes on a part-time schedule with McDowell as the driver of the No. 95 Ford Fusion.

“But we’re getting closer to being able to move back into our shop,” McDowell told LastCar.com. “It won’t be like how it was. We lost a good portion of the shop that’s gonna take months and months to rebuild, but we have enough space up front to operate out of our shop again.

“Our plan is to move back in after Kentucky. It’s been a mess and Wally Rogers and all the guys have been working hard on that, too. And I’d say that’s where it’s affected us the most it’s just been a distraction. It’s taking a lot of our key people out of working on race cars and trying to get us back into a shop.”

“All in all, I’m open-minded,” Keselowski said before Sunday’s Sprint Cup race at Michigan International Speedway. “I just want to see the racing continue to improve.

“The thing about this sport that’s hard to explain to people, because they ask me all the time why we change the rules so much, and I think it kind of goes back to the tug-of-war between NASCAR and the teams – the teams continuously innovating and NASCAR continuously trying to make the racing as high quality as possible.”

“In that tug-of-war, any time NASCAR changes something to try to make the racing better, whether that’s aerodynamically or engines or some other change, we seem to have the resources – whether it’s someone like Ford or internally – to gain back whatever they might take away with a rules change,” he said.

While some fans believe the racing needs to get better, Keselowski said a track record already exists that changes in recent years have indeed done just that.

“Over the last decade or so, we’ve significantly outpaced NASCAR and their changes to the car to try to keep the racing to where you can pass and do things,” Keselowski said. “We’ve done that all with the aerodynamic category. We’ve seen cars gain probably 200 to 300 percent in downforce over the last 10 years.

“In some point, NASCAR’s trying to get out in front of it, and that’s their job to keep the racing as good as it can be.

“So, in that sense, I completely agree that you have to continuously change the rules to keep up with the teams, the iterations we come up with to make our cars perform that aren’t necessarily in the best interest of the sport. It’s, to me, a good time to see them trying to do just that.”