Marcus Richmond will move from Todd Gilliland‘s No. 4 truck to the No. 46 team for its next two events: at Iowa Speedway with Riley Herbst and at World Wide Technology Raceway at Gateway with Chandler Smith.

Wes Ward, a shop foreman at KBM, will serve as Gilliland’s interim crew chief this week at Texas.

Richmond has been Gilliland’s crew chief since last year. Through eight races this season the No. 4 team has just one top five (Kansas) and three top 10s, with two finishes in seventh. Gilliland has led only eight laps, including seven in the last race at Charlotte.

Michael Shelton, who served as the crew chief for the No. 46 team in its limited schedule this season, will serve as interim crew chief for Gilliland at Gateway and Iowa.

The No. 46 truck has made only three starts, with Herbst earning a best finish of ninth at Kansas.

I have a lot of respect for @MarcusRichmond_ and will continue to remain close with him.

As a whole we weren’t performing at the level we needed to, we’ll shake some things up and see what happens! https://t.co/Wp8OcrB61g 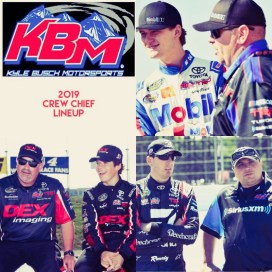 However, the three-race suspensions are only for the Truck series instead of across all three national series.

Steve O’Donnell, NASCAR’s chief racing development officer, hinted Monday on SiriusXM NASCAR Radio that series officials were looking at making such suspensions for the series the infraction occurred instead of across all three national series.

The matter became an issue because two of Busch’s pit crew members work for other teams in other series.

The suspensions to Dollarhide and Pierce will not impact their ability to work in Xfinity and Cup.

I definitely made a mistake last week at Atlanta. I called for RS tires while focusing on the RF. I am glad that the pit crew did not get suspended from cup races! With the support of @KBMteam and all the guys on this 4 team will pull through and not miss a beat!

A $10,000 fine to crew chief Rodney Childers because Kevin Harvick’s winning Cup car had one lug nut not secured after the Atlanta race.

$5,000 fines each to crew chief Tim Brown (of the No. 52 team of David Starr) and Mike Shiplett (of the No. 42 team of John Hunter Nemechek) because each team had a lug nut not secured after the Xfinity race.

A NASCAR executive hinted Monday that members of Kyle Busch’s Camping World Truck pit crew will be suspended after a tire came off Busch’s vehicle last weekend at Atlanta but that the suspensions likely won’t carry over to other series.

That is an important distinction because members of Busch’s crew work as a pit crew in other series.

Busch’s chances for winning the Truck race ended on a stop late in Saturday’s race. The team intended to change all four tires but had trouble with the right front tire. Once it was secured, Busch exited the pit stall but left rear lug nuts already had been removed. Shortly after exiting pit road, the left rear tire came off.

The Camping World Truck Series Rule Book states that “any loss or separation of an improperly installed tire(s)/wheel(s) from the vehicle after exiting the team’s assigned pit box will result in a three-race suspension of the crew chief, tire changer of the lost wheel and the jack man.’’

“The rule is clear in terms of the suspension that occurs,’’ O’Donnell told SiriusXM NASCAR Radio. “That is one of our major safety violations that we have in the rulebook and it’s really understood by the competitors.

“Where we took a look at that is around the rosters and the roster limitations we have on all three series. In the past, that’s been something that we’ve had that if you were suspended for that violation it carried across all three of our national series.

“I think that’s really the discussion, not so much will they be penalized — they will — it’s should it just apply to the Camping World Truck Series. I think that’s where we’re leaning but (series officials) wanted to take the time to get through the weekend and have that dialogue internally.

“We want to be as fair as we can. We want the penalty obviously to have some teeth into it. We think it does in terms of the suspension. We want to make sure it possibly just applies to that series and who is working on that race.’’

Richmond, whose teams have recorded at least one win every year since 2012, was at JR Motorsports last year with Cole Custer for the final 16 races. His single 2016 win came with Johnny Sauter in the season opener at Daytona International Speedway.

Crew chiefs Rudy Fugle and Kevin Manion return to Kyle Busch Motorsports. Fugle, who has guided his team to the owner’s championship each of the past three seasons – and led Erik Jones to the driver’s title in 2015 – will work with Christopher Bell on the No. 4 team. Manion returns to the No. 51 team and will work with Kyle Busch, Myatt Snider, Todd Gilliland and Harrison Burton.

NASCAR suspends three team members but only for Truck Series February 28, 2018 10:47 am

NASCAR hints that pit crew suspensions could be for particular series only February 26, 2018 9:05 am