The eNASCAR Heat Pro League held its first races of the 2020 season Wednesday night on a virtual Homestead-Miami Speedway, which featured wins by drivers for JTG Daugherty Racing and Hendrick Motorsports.

In the Xbox One race, Justin Brooks won for JTG Daugherty. In the PlayStation 4 race, Nick Jobes was victorious for Hendrick.

The second round of the season will take place April 29 at Watkins Glen International as players will pilot trucks from the Gander RV & Outdoors Truck Series.

Here are the results of Round 1 of the 2020 #eNASCARHeat season!

Congratulations to all the drivers on some highly entertaining racing, but especially to @j_brooks92 and @NJobes25, the winners tonight.

We'll be back next week on Wednesday at 8pm EDT! #eNASCAR @NASCAR pic.twitter.com/gF0Gc34Ovb

Now this is how you start a Season! Started Pole, was saving gas and fell back and came thru the field when it mattered and won in the #eNASCARHeat Pro League Race! Car was on a rail. Thank you everyone at @JTGRacing and @cottonelle for your support, 1 of hopefully more to come! https://t.co/jNX1keP2Rt

The eNASCAR Heat Pro League returns for its second season tonight with a race on a virtual Homestead-Miami Speedway. The event will be streamed at eNASCAR.com and NASCAR Heat’s Twitch and Facebook.

The 14-race season is divided into three four-race segments, with one driver per platform (Xbox One and PlayStation 4) earning a spot in the championship race as well as a shot at the $200,000 prize pool. A final wild card event at the virtual Daytona International Speedway in July will allow for two more drivers to secure their Championship hopes.

Unlike last year, races won’t just be held using Cup Series cars. Three races will be held using Xfinity cars and three will use vehicles from the Truck Series, including a race at Eldora Speedway.

The series features 28 gamers from 14 teams, each owned and operated by NASCAR race teams. Each team fields two drivers, all competing for a shared championship.

After last season, all teams were required to clear one of their roster spots. Chip Ganassi Gaming, GoFas Gaming and Joe Gibbs Gaming each have two new drivers.

Draft results and team rosters can be found here.

$10,000 will be on the line today in NASCAR Heat exhibition races that will feature Cup Series rookie Tyler Reddick and Xfinity Series driver Kaz Grala.

The races, which will be played on PlayStation 4 and XBox One, starts at 2 p.m. ET on a virtual Homestead-Miami Speedway.

Reddick and Grala will compete in the XBox One race.

The race will be broadcast through Motorsport Network, with coordination from Speed51.

Qualifying was held Wednesday through Friday, with the fastest qualifiers from each console invited to the main event.

The race will serve as a preview for the 2020 eNASCAR Heat Pro League Season, with the preseason beginning March 25.

The eNHPL consists of 14 teams from the Race Team Alliance and is a partnership between the RTA, Motorsport Games and NASCAR. There is $200,000 on the line this season.

Here's your chance to race for $10,000 on @NASCARHeat! Don't have the game? Download it from home & start racing on @Xbox or @PlayStation.

The #NASCARHeat10K will feature the best of the best in #eNASCAR & you might even race against some real #NASCAR drivers! https://t.co/KnxNeuVRbT

The finale featured two 70-lap races, one for the PlayStation 4 league and one for the Xbox One league. Fourteen drivers were in each race.

Players for Leavine Family Racing and Stewart-Haas Racing were the winners of the 11th round races in the eNASCAR Pro League Wednesday night, which were held on a virtual Homestead-Miami Speedway.

Josh Harbin (@ThAbEaR_95) won for Leavine Family Racing in the PlayStation 4 race and secured the team a spot in the championship round.

Josh Shoemaker (@SHG Slick 14x) won the XBox One race for SHR, which will also be in the championship round.

The championship round will be held on a wild card track on Oct. 23rd and will consist of Team Penske, JR Motorsports, Stewart-Haas Racing and Leavine Family Racing.

Here is the point standings heading into the season finale. 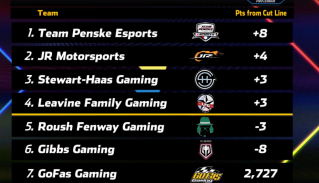 You can watch the races in the video below