Well, this is awkward.

Joey Logano will drive one of Kevin Harvick‘s old paint schemes in this weekend’s Southern 500 (Sunday at 6 p.m. ET on NBCSN). More specifically, he will drive the Pennzoil scheme Harvick raced to a dramatic win with in the 2007 Daytona 500.

Why is this funny and awkward at the same time?

In 2010 at Pocono Raceway, three years after Harvick’s win, Logano was spun from contact with Harvick with two laps to go.

After an argument on pit road, Logano shared his feelings about Harvick with the media.

“I don’t know what his deal is with me, but it’s probably not his fault, his wife (DeLana Harvick) wears the firesuit in the family, she tells him what to do,” Logano said.

So what’s the best way for Logano’s Southern 500 scheme to be revealed?

With Logano’s wife, Brittany, dressed in a matching uniform and throwing a package of baby diapers at him and informing him it’s his turn to change their son Hudson’s diaper.

“I wear the firesuit in this family,” Brittany declares.

A new year brings many changes. Such is the case for NASCAR teams. Here’s a look at some of the key changes heading into the 2018 season for Cup teams that have announced drivers for this season.

What’s new: Chip Ganassi Racing announced Wednesday that Doug Duchardt has been hired to be the organization’s chief operating officer.

What’s the same: McMurray is back for a ninth season with the team in his second stint there. Matt McCall begins his fourth season with McMurray.

What’s new: Discount Tire moves over to be a primary sponsor of Keselowski’s car for 10 races.

What’s the same: Keselowski is back with crew chief Paul Wolfe for an eighth consecutive season. 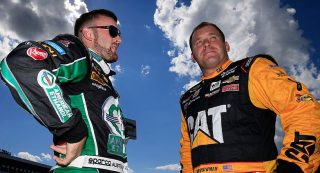 What’s new: He has only one teammate, Ryan Newman, at Richard Childress Racing, with the team cutting back to two cars for 2018.

What’s the same: Crew chief Justin Alexander is back after being paired with Dillon in May 2017.

What’s the same: Crew chief Rodney Childers is back for a fifth season with Harvick. Since they’ve been together, they’ve won one championship, scored 14 victories and captured 13 poles.

What’s new: AdvoCare is back but with a new paint scheme for this season.

What’s the same: Matt Puccia is back as Bayne’s crew chief. They’ve been together since the 2016 season.

What’s new: A new number for the son of Hall of Famer Bill Elliott.

What’s the same: Crew chief Alan Gustafson is back and Elliott, who enters his third Cup season, seeks his first career series win. 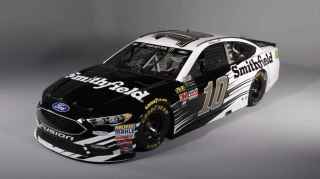 What’s new: A new ride for Almirola, as he moves from Richard Petty Motorsports to Stewart-Haas Racing. That’s just among the many changes. Almirola also will have a new crew chief. John Klausmeier, who has been an engineer with the organization since 2009 and filled in as in interim crew chief previously, moves into that position for Almirola’s team. And a new look. Smithfield joins Almirola in the move, but its car will be black and white.

What’s the same: Even with the move, Almirola is driving a Ford again.

What’s the same: Crew chief Mike Wheeler is back for his third season with Hamlin. They’ve combined to win five races and three poles the previous two seasons. 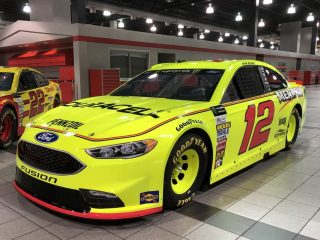 What’s new: A new team. Blaney moves from the Wood Brothers to a third entry for Team Penske. He’ll be teammates to Brad Keselowski and Joey Logano. Team Penske purchased a charter from Roush Fenway Racing for Blaney’s car.

What’s the same: Crew chief Jeremy Bullins joins Blaney in the move from the Wood Brothers to Team Penske.

What’s the same: Crew chief Mike Bugarewicz is paired with Bowyer for a second season in a row.

What’s the same: Crew chief Brian Pattie and Stenhouse are set to begin their second season together after winning two races and making the playoffs last season.

What’s the same: This will be the fourth Cup season for crew chief Adam Stevens and Busch. They’ve won 14 races and 11 poles the past three seasons together.

What’s the same: Suarez is back with Arris and Stanley as sponsors in 2018. 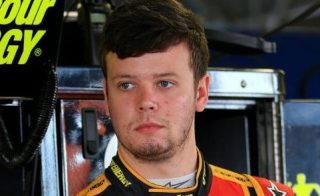 What’s new: A new driver in this car that Matt Kenseth had run the past five seasons. Also, crew chief Chris Gayle moves with Jones, the 2017 Cup rookie of the year, from Furniture Row Racing to Joe Gibbs Racing for the 2018 campaign.

What’s the same: The car has the same number as last year.

What’s new: A new home for Menard, who goes from Richard Childress Racing to the Wood Brothers. Greg Erwin will be the new crew chief, taking over for Jeremy Bullins, who moves from the Wood Brothers to Team Penske with Ryan Blaney.

What’s the same: The Wood Brothers.

What’s the same: Crew chief Todd Gordon is back for his sixth season with Logano. They’ve combined to win 16 races and 14 poles working together.

What’s new: A new driver and new number for what had been the No. 5 team at Hendrick Motorsports. The Xfinity Series champion moves up from JR Motorsports. He’ll have Darian Grubb as his crew chief.

What’s the same: Liberty University, a longtime backer of Byron, is back as a sponsor.

What’s the same: Caterpillar, which has been a partner with Richard Childress Racing since 2009, will sponsor Newman’s car in select races in 2018.

What’s the same: DiBenedetto is back with the team for a second consecutive year. 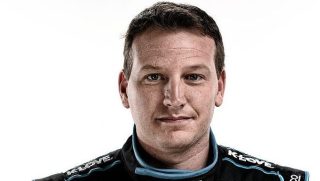 What’s the same: Team remains in the Ford camp.

What’s new: The team purchased a charter after leasing one last season.

What’s the same: Buescher is back for his second year with the team.

What’s new: He has a new teammate with Michael McDowell joining the team and replacing Landon Cassill.

What’s the same: Ragan is back for his fifth season (in two stints) with Front Row Motorsports. 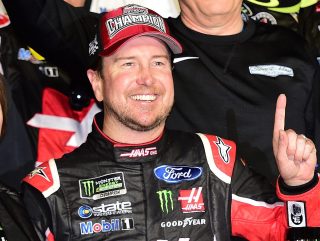 What’s new: Is what’s old. Busch is back with Stewart-Haas Racing as is sponsor Monster Energy after his contract option was not picked up last season amid questions about sponsorship. Busch also has a new crew chief. Billy Scott moves from the No. 10 team to be Busch’s crew chief this season. Scott replaces Tony Gibson, who moves into a position at the shop.

What’s the same: The car number for Busch, who will enter his fifth season at Stewart-Haas Racing.

What’s new: A new sponsor for the Chip Ganassi Racing driver. Credit One will replace Target on the No. 42 Chevrolet in 2018. Also Larson got engaged to girlfriend Katelyn Sweet in December.

What’s the same: Larson will be teamed with crew chief Chad Johnston for a third consecutive year. They’ve combined to win five races and three poles together. 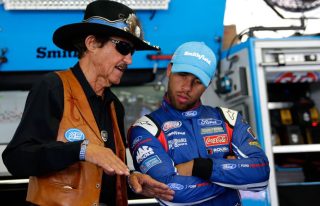 What’s new: Wallace joins the team after running four races for Richard Petty Motorsports when Aric Almirola was injured last season. RPM also has switched from Ford to Chevrolet and formed an alliance with Richard Childress Racing and will get its engines from ECR Engines this season. Team also is adding sponsorship with Smithfield putting most of its resources with Almirola at Stewart-Haas Racing.

What’s the same: This will be Allmendinger’s fifth season with JTG Daugherty Racing.

What’s the same: He’s back with crew chief Chad Knaus for a 17th consecutive year.

What’s new: A new moniker for Truex – reigning Cup champion. Also, the team is back to a one-car operation with the shuttering of the No. 77 team.

What’s the same: Champion crew chief Cole Pearn is back to lead this team.

What’s the same: Greg Ives is back as the team’s crew chief.

What’s the same: The car number for the team.

Kevin and DeLana Harvick welcomed their second child, and first daughter, on Thursday, with Kevin making the announcement official on his Twitter page Saturday morning.

Piper Grace was born a little early. She was expected to arrive in early January.

Miss Piper Grace joined the gang Thursday night! Everyone is healthy and we have an extremely excited big brother! pic.twitter.com/Th2KdXyy1B

Her older brother, five-year-old Keelan – who originally broke the news of his sister-to-be back in July on SiriusXM NASCAR Radio – is excited to officially be a big brother now.

Mom, daughter, dad and big brother are all doing well.

Congratulations to the Harvicks and their newest family member.

Kevin Harvick, who once owned an Xfinity team and races in that series, voiced his displeasure Tuesday night with NASCAR’s rule to further limit Cup drivers in Xfintiy and Truck races next year.

“I know there are going to be a lot of people that disagree with me, but it’s hard when you’re trying to build a business and you’re trying to sell sponsorship, you have no tool greater than yourself when you’re in a situation like Brad (Keselowski), myself or Kyle (Busch),’’ Harvick said on his SiriusXM NASCAR Radio show “Happy Hours.’’

“It seems you’re just getting your balls chopped off every time you try to go out and sell sponsorship to try to keep your team funded because of the fact you can’t run enough races, so you can’t tie it to enough things. To me, it’s not the right thing to do.’’

Harvick did say that he’s fine with Cup drivers being kept out of the playoffs in both series and the Dash 4 Cash races but they should not be kept out of any other races.

Harvick admits he’s biased toward team ownership because of his history. Harvick and wife DeLana owned Kevin Harvick Inc., which ran in NASCAR from 2002-11. The organization won Camping World Truck Series titles in 2007 and ’09 with Ron Hornaday Jr. and won the owner’s title in 2011. They sold the team after the 2011 season.

Harvick said Tuesday on “Happy Hours” that Ryan Preece, who won this past weekend at Iowa Speedway for Joe Gibbs Racing, would not have had a chance to drive that car had it not been for JGR using Cup drivers.

“Let me tell you this, Ryan Preece‘s car wouldn’t even been in existence if Denny Hamlin and Erik Jones didn’t have the sponsorship … for that 20 car to be on the race track,” Harvick said on his show.

“I agree with the opportunity (for young drivers) but sometimes you have to balance that opportunity with trying to run a business,’’ Harvick said Tuesday night. “When you’re cutting Kyle’s feet and Brad’s feet out from underneath them when they can’t do what they want to do, then it becomes hard for the teams to do what they need to do.

“I think what you’re going to see happen, when you run out of those options, those Xfinity sponsors are going to start plugging holes on the Cup side and they’re still going to get the Cup driver that they want … because they’re going to put their money on the Cup car.’’

There’s big news in the Harvick family. The question is who has the bigger news: Kevin and wife DeLana are going to have a second child, or son Keelan will become a big brother for the first time.

Momma and Papa Harvick left it to Keelan to make the big announcement on social media that he’ll soon have a little sister.

Kevin then discussed it further on his weekly Happy Hours show on SiriusXM NASCAR Radio.

Congratulations to the Harvicks. The big happy family will soon be a bit bigger.

AUDIO: The Harvick family is getting a little bigger and @KeelanHarvick broke the news on #HappyHours. pic.twitter.com/4sc0mHf9pC