Other than the lines needing to be painted, the repave of Texas Motor Speedway’s racing surface has been completed.

The track officially unveiled the finished product on Monday, less than a month before its first usage by NASCAR.

One of those present for the reveal was NASCAR Cup driver and Texas native Chris Buescher.

In addition to the repave, the project lowered the banking in Turns 1-2 from 24 to 20 degrees and the racing surface width was expanded from 60 to 80 feet in those turns. Turns 3 and 4 were just repaved.

A drainage system was also installed to help prevent long rain delays or postponements that plagued both NASCAR weekends and the IndyCar weekend last year.

In the above video you can watch Buescher drive around the track and give his commentary on the how the project turned out. Buescher and the rest of his NASCAR competitors will return to Fort Worth, Texas, for the April 9 O’Reilly Auto Parts 500.

“The track was soaked this morning when we got here and was dry within the hour without any assistance,” Buescher said in a press conference. “We ran maybe 10 laps with a pace car. That’s all we really did to help. … Turns 1 and 2 over there, it’s interesting how wide it is now. It’s pretty amazing, when you get on the front stretch, which is it’s always been without white lines now. Looking at the corner coming up, it’s extremely wide, we’ve got a lot of options. … The bottom groove is so far down the track, you feel  like that track is going to be quite a bit slower.”

After the first NASCAR race weekend, the Verizon IndyCar Series and the NASCAR Camping World Truck Series will return to race on the track during the weekend of June 10.

Chris Buescher moved into the top 30 in the Sprint Cup points standings, securing a provisional playoff berth with three races remaining in the regular season.

Buescher, who finished fifth Sunday at Bristol Motor Speedway, is 13 points ahead of 31st-ranked David Ragan. By virtue of his victory at Pocono Raceway, Buescher will qualify for the Chase for the Sprint Cup if the Front Row Motorsports driver can maintain his top 30 spot in the points through the upcoming races at Michigan, Darlington and Richmond.

“That’s Chase eligibility in one race out of the four we had to do it,” Buescher said. “Now we have to hold onto it. I’m really proud of this team. Our Love’s Ford Fusion had great speed this weekend. We’re looking forward to the next handful of races. We’ve got some really good tracks for us coming up. We knew Bristol would be a good one for us. It took us a day later to do it, but we got ourselves a top five and had a blast out here. That was an awesome run.”

Buescher’s move into the top 30 eliminated one of the provisional spots for winless drivers. Ryan Newman sits on the cutoff line in 14th, 35 points ahead of Trevor Bayne and 39 ahead of Kyle Larson. 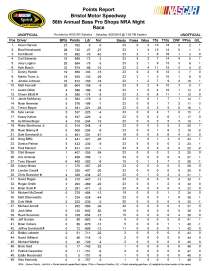 DALLAS — Rookie Xfinity Series driver Erik Jones said Joe Gibbs Racing knows what it plans to do with him in 2017.

Jones didn’t give specifics on the team’s plan. The 20-year old driver is five races into the Xfinity season with the No. 20 team for JGR after winning last year’s Camping World Truck Series title for Kyle Busch Motorsports.

Jones, who won twice in the Xfinity Series in 2015 in a part-time capacity, is seventh in the points standings. The Michigan native has three top-five finishes and won the pole at Phoenix.

“I’m pretty focused this year on hopefully getting this Xfinity championship, that would be pretty great momentum for me,” Jones said. “Just excited to see what the next few years are going to bring.”

Knowing where he’ll be a year from now has eased a week-to-week burden that had been on Jones his entire career.

“It’s the first time in my career where I’ve been in a position like this, where I am set in my future at this point at least, and that’s a great feeling as a young driver, not to really have to really fight every week,” Jones said. “I still fight every week, like I have always, but it’s nice not to have that added pressure of not knowing what the future holds or what’s going to happen. It’s definitely a little bit more relaxed knowing that I can just go out and do my best and hey, if it doesn’t work out, it doesn’t work out.”

The Texas native is in his first full-time Sprint Cup season, driving the No. 34 Ford in a partnership between Roush Fenway Racing and Front Row Motorsports. The 23-year-old driver doesn’t know yet where he’ll be competing in 2017 but said the possibility remains that he could be right where he is a year from now.

“We don’t have anything figured out yet beyond this year,” Buescher said. “I’m still under contract with Roush as a development driver. I do not know what next year holds. It could be the same, could be different. We haven’t gotten that far, we’ve barely gotten far enough as to discuss how this year is all going to work out.”

Buescher would be surprised if he learned his fate any time soon.

“It’s usually January of next year before I hear anything,” Buescher said. “That would be pretty typical for me not to hear anything through this calendar year.”

Through five races, which included the first anniversary of his Sprint Cup debut at Auto Club Speedway, Buescher is 35th in the point standings. His best finish is 26th at Las Vegas Motor Speedway.

These results come with Roush sharing an open book of engineering data with Front Row Motorsports.

“Just a matter of trying to get this year flowing nice and smooth and get the results better,” Buescher said. “We’ve haven’t gotten the finishes we need to get, but we have had some speed at a couple of the races so far and a couple we need a lot of improvement.”

There’s a lot of good, young talent running in the Sprint series this season. From Chase Elliott in the No. 24, Ryan Blaney and Chris Beuscher, there’s an endless amount of potential in the under-25 crowd in the NASCAR Sprint Cup Series.

When you’re young, it’s fun to play with toy trains.

But when you’re an adult, playing with a real train is the last thing you want to do.

That’s why Front Row Motorsports and CSX Transportation are renewing their “Play It Safe” railroad crossing initiative for 2016, the fourth consecutive season the two sides have worked together.

2015 NASCAR Xfinity Series champion Chris Buescher, who is in his rookie season in the Sprint Cup Series, will drive the No. 34 Ford Fusion for Front Row Motorsports and be the point man for the “Play It Safe” program.

According to a media release, “(Buescher) will serve as an ambassador to 18- to 34-year-old males among NASCAR’s fan base, the demographic mostly likely to be involved in a train collision and the targeted audience of CSX’s safety campaign.”

CSX and the “Play It Safe” initiative will be on Buscher’s race car for eight races this season, including events at Atlanta Motor Speedway, Watkins Glen International and the fall race at Richmond International Raceway.

“I got to work with CSX a little bit last year when I drove the No. 34, and I really respect what they’re doing with their NASCAR program,” the 23-year-old Buescher said. “It’s all about safety and spreading the message to race fans. If we can reach people and prevent even one collision, it’ll be a successful campaign.”

Buescher ready to claim Xfinity Series title, but so are three others November 21, 2015 8:00 am

No changes for Buescher as he prepares for championship stretch run October 17, 2015 10:30 am