We’re one race into the Round of 8 in the NASCAR Chase for the Sprint Cup championship, with two more races left to go (Sunday at Texas, Nov. 13 at Phoenix) before the championship-deciding race at Homestead-Miami Speedway on Nov. 20.

Jimmie Johnson’s ninth career win Sunday at Martinsville propelled the driver of the No. 48 Chevrolet to the top spot in the standings.

It also locked Johnson into one of the four finalist spots in the championship-deciding season finale.

However, the news isn’t as good for the fourth JGR driver, Carl Edwards. He left Martinsville and will come into this Sunday’s 34th race of the season last in the Round of 8 standings, 32 points behind Johnson.

In addition to Edwards, three other drivers are also under the bubble: fifth-ranked Joey Logano (11 points behind Johnson), sixth-ranked Kevin Harvick (-16) and Kurt Busch (-18).

The Sprint Cup Series and its 12 remaining Chase drivers are preparing for the last race of the Round of 12 at the unpredictable Talladega Superspeedway.

Only Jimmie Johnson and Kevin Harvick have nothing to fear due to their wins at Charlotte and Kansas.

Heading into the Alabama 500, Joey Logano and Austin Dillon are tied for the bubble with 3,045 points each. With Dillon below the cutoff spot are Denny Hamlin (-6 points from the cutoff), Brad Keselowski (-7) and Chase Elliott (-25).

Keselowski won the May Talladega race and is the only repeat winner in the last 11 races at the 2.66-mile track. Both Elliott and Dillon’s only restrictor-plate wins have come at Daytona in the Xfinity Series.

Sunday was not a good day to be a driver in the Chase for the Sprint Cup after five of the 12 remaining finished 30th or worse at Charlotte Motor Speedway.

Chase Elliott and Austin Dillon are tied at three points behind Denny Hamlin in eighth, the cutoff spot for the third round. Following them are Joey Logano and Kevin Harvick.

But it was business as usual for Jimmie Johnson, who won his track-record eight race at Charlotte Motor Speedway. He advances to the third round for the first time since the elimination format was introduced in 2014.

Immediately behind Johnson is Matt Kenseth (+31 to the cutoff) and Kyle Busch (+27).

The Sprint Cup Chase grid has four fewer drivers now after the completion of the first round.

No longer eligible for the championship are Kyle Larson, Tony Stewart, Chris Buescher and Jamie McMurray.

Martin Truex Jr. and Kevin Harvick advanced to the second round off wins while the rest of the 12-driver field was based off points.

The second round will take place at Charlotte Motor Speedway, Kansas Speedway and Talladega Superspeedway.

Click here for the full Chase grid following the first round.

Through two Sprint Cup Chase races, there have been two different winners. Kevin Harvick joined Martin Truex Jr. as drivers who clinched entries in the second round of the Chase.

Jamie McMurray and Kyle Larson essentially swapped spots with McMurray now among the four drivers outside the top 12. McMurray is in 13th, followed by Austin Dillon, Tony Stewart and Chris Buescher. Larson has a five point advantage over McMurray.

The Sprint Cup Series now heads to Dover International Speedway for the last race of the first round.

Here is the full Chase grid after the Bad Boy Off Road 300 at New Hampshire. 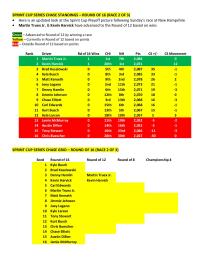 Chase grid: Larson, Harvick among first four out with Stewart on edge of cutoff September 20, 2016 12:49 pm