Hell yea! Anytime you go head 2 head with @KyleLarsonRacin you better be on it. Onto @AtomicSpeedway tomorrow 🏁 https://t.co/O2UwaT8MFN

P2 at Sharon. Didn’t do a good job in lap traffic at the end. Congrats @CBellRacing. Hopefully can get Atomic in tomorrow.

A lack of sponsorship and team funding has brought a premature end to the 2015 season for NASCAR Xfinity Series driver Cale Conley.

The driver of the No. 14 TriStar Motorsports Toyota had qualified for all 30 races thus far in 2015, with a best finish of 16th at both Fontana earlier this season and Kentucky last month.

The 23-year-old driver from Vienna, West Virginia was in his first full-time season in the Xfinity Series. He is ranked 19th in the standings.

“I would like to thank the TriStar Motorsports organization and owner Mark Smith for giving me this opportunity to race at tracks I had not visited in the past,” Conley said in a statement. “I am really looking forward to finalizing my 2016 race season plans and I am excited to see everyone at Daytona International Speedway in February.

“I want to thank all of my loyal fans, my family and the support from the members of the Iraq and Afghanistan Veterans of America.”

Justin Marks shot to the top of the speed chart in the closing minutes of Friday’s second Xfinity Series practice at Mid-Ohio Sports Car Course.

Alex Tagliani, who barely avoided a head-on crash with Cale Conley in the first practice session, was third-fastest in the second practice (95.204 mph).

Qualifying for Saturday’s Nationwide Children’s Hospital 200 will take place at 11:15 am ET.

The race itself is also Saturday at 3:30 pm ET at the track, located about 50 miles north of Columbus, Ohio. 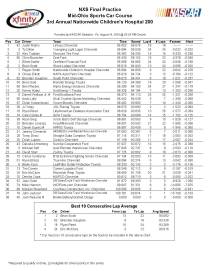 After the pomp and circumstance, the tributes and shared memories, a final race still had to be run.

In his last NASCAR start, Kenny Wallace started seventh and would finish on the lead lap in 15th, but spent most of the U.S. Cellular 250 floating between 13th and 10th place.

The floating stopped on a restart with 41 laps left. Wallace and his No. 20 went for a ride in Turns 1 and 2 after Darrell Wallace Jr. (no relation) hit his left rear. Then Cale Conley bounced off his nose giving the No. 20 significant damage.

“It was just a deal where everything was going good,” Wallace said afterward. “It looked like we were going to close in on a good finish, but as normal short track racing, the horns came out at the very end.”

“No excuse – running along in the middle of the race there and I felt something hit my left side leg and low and behold my left side spot mirror fell out,” Wallace said. “I just chewed Ryan Reed’s butt out. I said, ‘Buddy, next time you spin somebody out like that, don’t pass me up.’ He was going to walk right past me on pit road, so (you) try to give those young kids a little bit of information. I said, ‘When you spin somebody out, you stop.’

Reed was apologetic in his interview with NBCSN.

“I’m sorry to him, right off the bat,” Reed said. “Did not mean to. I tried to cross him up and he started coming down and I tried getting out of it. I just carried too much speed into (Turn) 3 … I definitely didn’t want to be the guy to spin him in his last race.”

Wallace’s career ends having with him having raced in a record 547 Xfinity Series events.

“It was exciting. Obviously, I’m not going to be upset over a hard-earned, 15th-place finish,” Wallace said, later adding, “The only bummer is I can’t go back and get him next week.”