HARRISBURG, N.C. — Wailing strands of a saxophone leap from Ryan Preece’s phone. The distinctive opening notes of Bob Seger’s “Turn the Page” take Preece back in time even as the NASCAR Cup rookie looks ahead.

“If you listen to the lyrics, there’s a lot of things I can relate to,” Preece tells NBC Sports. He speaks while seated at a table that comfortably accommodates 10 people in the competition room at JTG Daugherty Racing, his new home after running limited Xfinity races the past two years with Joe Gibbs Racing.

Although Seger’s song is about a musician, it could be about the highs and lows of a racer. Preece, born 17 years after the song’s debut, has lived life in the spotlight and experienced the late-night road trips on his circuitous path to Cup.

On a long and lonesome highway

The song’s opening line resonates with Preece. The 28-year-old Connecticut native raced modifieds throughout the Northeast and traveled to the South numerous times in his quest to reach NASCAR’s premier series. There were many nights on the road.

Preece worked his way to the Xfinity Series in 2016 but had limited success with an underfunded JD Motorsports team. With no other opportunities after that season, Preece returned home and faced the likelihood he would race modifieds the rest of his career.

Things changed when Carl Edwards shocked the sport by announcing in January 2017 that he would no longer compete. Joe Gibbs Racing suddenly had some Xfinity races available.

If Edwards had not left the sport, “I probably wouldn’t be where I am today,” Preece said.

“There was no talk of going anywhere. When I went home, I went home (after 2016). I spoke to a few teams and the (cost to run those cars) were so high. I just figured I could go make a living running a modified and winning. It wasn’t a sense of I wanted to be a big fish in a small pond … this was my best chance at being successful.”

“I was going to figure a way out,” Preece said. “That was the chance I was waiting for.”

He gathered enough money for two races, won at Iowa and got two more races that season. That turned into 15 races in 2018. He won at Bristol. His success that season led to the ride at JTG Daugherty Racing in place of AJ Allmendinger.

and there’s nothin’ much to do

you just wish the trip was through

A crew member often played the song on long road trips and it has remained with Preece since, a reminder of those all-night drives from one region of the country to another to race.

As he plays the song on his phone, Preece slips back to the past. He recalls a time he raced at Stafford Motor Speedway in Connecticut, finished around 11 p.m. and drove through the night with his team to be at Bowman Gray Stadium in Winston-Salem, North Carolina, for a race that Saturday. He won that weekend.

Preece smiles at the memory.

On the road again

Up on the stage

“When I was younger, I was like that’s pretty catchy,’’ Preece said of the song. “As you grow older and you go through different events and different situations in your life, you start to relate to it. Every time there has been a great moment in my life, the more I can relate to that song.”

He hopes to add to the collection of memories this season with the No. 47 team. Preece is ready for the season to begin. He’ll get an early start. His team will be among those that will test at Las Vegas Motor Speedway on Jan. 31 – Feb. 1.

Shortly after that, he will be off to Florida to compete in his first Daytona 500.

Even as he heads on a new journey with Cup, Preece won’t leave the modified series behind. He plans to run a few races this season when his schedule allows.

But after years of going back-and-forth from the Northeast to the South, Preece has one trip left. He heads to Connecticut today to retrieve the last of his belongings and complete the move he and his wife have made to North Carolina. He also will tow his modified with him.

He plans to leave Connecticut at 3 a.m. Sunday. He knows through experience that’s the best time to depart to avoid New York traffic snarls.

One more overnight road trip. This time he’s headed for a new journey and a chance to turn the page in his racing career.

Coleman Pressley admits he’s a “huge note taker” and he’s been doing just that as he reviews film and prepares for his first season as Brad Keselowski’s spotter.

Pressley, the son of former Cup driver Robert Pressley, spent the past four years spotting for AJ Allmendinger at JTG Daugherty Racing. Pressley became available after Allmendinger was not brought back for this season.

One of the biggest challenges for Pressley will be Daytona Speedweeks and the Daytona 500. Keselowski is among the sport’s premier drivers at that track and Talladega. He and former spotter Joey Meier — they had been together since 2006 until parting after last year — were among the top driver/spotter duos, winning four of the last 17 plate races (only teammate Joey Logano matches Keselowski’s record in that span).

Pressley, who doesn’t have as much experience spotting a car at the front of the field at a plate track, has been studying how the race is different there than in the middle of the field.

“I feel like I’ve learned more in two or three times sitting down with Brad than in four years of spotting. He’s that good at it. It’s like dealing with AJ at a road course. AJ is so good at a road course, I learned a lot from him there.”

One of the challenges with racing at Daytona is how the lead car controls the field and moves up and down the track, blocking the run from the cars in the lanes behind. It’s critical for the spotter to tell the driver which lane is making a move so the driver can block and remain in the lead.

“Everything that we’re reviewing is more situational,” Pressley said. “Like what happens when three cars are this close and this lane is a car length apart. … Does this change if you’ve got a slower car third in line or what happens if there’s three lanes. We’re trying to make sure that when we get there, when I’m on the roof, that when I see something I know what is going to happen.”

Pressley already has watched last year’s Daytona 500 multiple times and planned to watch the race with Keselowski this week.

South Boston Speedway will not count caution laps this season for its local division races 150 laps and shorter, the track announced this week.

It’s an interesting concept. While it’s not something that could be done for a 500-lap Cup race, maybe it is something to ponder for the K&N Pro Series. Possibly a Truck race. Or maybe don’t count caution laps in the last 50 laps of a Cup or Xfinity race at a short track.

Maybe that is extreme, but with NASCAR President Steve Phelps saying last fall that “everything is in play” when examining the sport, why not consider such an idea?

Cathy Rice, general manager at South Boston Speedway, a .4-mile track, told NBC Sports that the change — caution laps did not count previously for local races 75 laps or less — was made to give fans more racing.

What if the race has several cautions and the night stretches on? Rice, entering her 31st season at South Boston, said they would shorten the event. It goes back to her belief that they should limit the racing to three hours (not including practice and qualifying). If the first race takes the green flag at 7 p.m., then the checkered flag should wave on the final race by 10 p.m. so fans can return home at a reasonable time.

Rice said she’ll keep a close eye on how long the races go with the caution laps not counting. The rule may work perfectly or may need some tweaking, but for Rice it was worth trying after fans had told her they wanted more green-flag racing.

That’s what they’ll get this season.

Daniel Suarez’s first time on the track with his new team at Stewart-Haas Racing was Wednesday and Thursday at a Goodyear tire test at Auto Club Speedway.

Two other cars were there, including Suarez’s former team, the No. 19 team at Joe Gibbs Racing now driven by Martin Truex Jr.

The NBC SPORTS SCORES app is a new way to engage, read and watch all of the content across our platforms. 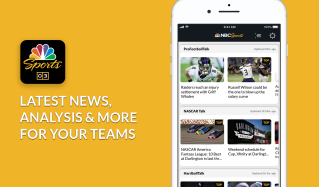 You can also get all of the latest NASCAR news on the app from NASCAR Talk. All of the NBC SportsTalk sites are available on it.

Click on the links below to download the brand new NBC SPORTS SCORES app via iTunes and Google Play.