NASCAR has issued $10,000 fines to three Cup Series crew chiefs for having one unsecured lug nut on their cars after Sunday’s playoff race at Texas Motor Speedway.

There were no other penalties.

Steve O’Donnell, NASCAR’s executive vice president and chief racing development officer, said ruling whether a driver spins intentionally to bring out a caution during a race is a “judgment call.”

“Well it’s going be a judgment call, for sure,” O’Donnell said. “I think that’s something you know as momentum builds or you see a trend and you’ve got to react, you do.

“We tend to trust the teams out there and the drivers maybe too much at times. But we’ll certainly take a look at that. Obviously, didn’t make a call during the race Sunday. If it’s something we’ve got to address, we’ll talk to the drivers and race teams over the week. If we need to address it, we will in the driver’s meeting ahead of Sunday’s race (at ISM Raceway) and make sure we’re staying on top of that.”

The spin by Wallace, which Richard Petty Motorsports said was a result of his left-rear tire going down, occurred in Turn 2 after Wallace appeared to save his No. 43 Chevy in an initial slide. The car then went into a half-spin on the apron, similar to Joey Logano’s spin last week at Martinsville Speedway, which was also questioned for potentially being intentional.

After Sunday’s race, a NASCAR spokesman told NBCSports.com that Wallace’s spin was reviewed, and officials determined it didn’t warrant a penalty.

Larson and other drivers had pitted just ahead of the yellow caused by Wallace’s spin and had to take a wavearound to get back on the lead lap.

Larson, who finished 12th, observed “Helen Keller could have seen” the spin was intentional.

“It’s B.S.,” Larson said. “I’ve done it. We’ve all done it in those positions, but until NASCAR steps in, and whether it’s a fine or a penalty with points or something, people are still going to do it.”

“I feel like NASCAR is backed in a corner on scenarios like this,” Stewart said. “There’s so many ball‑and‑strike calls that they’re put in the position of having to make, I think they’ve got to find a way to make it simpler to where it is what it is.

“Bubba wasn’t working for any team, any manufacturer.  He was trying to take care of himself in that scenario.  It could work for you one week. It could work against you the next week.  It’s just part of it.”

Stewart continued: “At what point do you sit there and say enough is enough?  At some point, we’ve got to somewhat adopt the old‑time tradition of ‘keep it simple, stupid.’ It’s just got to be simplified. They shouldn’t have to sit up there and babysit every single thing that everybody does all the time. There’s enough rules and regulations that they have to do to need to be in place, let alone the things that they shouldn’t have to be put in those positions.

The Stewart-Haas Racing drivers helped deliver the team its second 1-2-3 finish in the organization’s history, following the first at Michigan in June 2018.

Almirola finished second to Kevin Harvick, claiming his third top five of the year. Two have come in the playoffs.

Almirola was in the top five almost all evening, including leading 45 laps and winning Stage 2. Almirola, who was eliminated from the playoffs after the first round, lost the lead to Harvick for good with 79 laps to go.

“It felt really good,” Almirola told NBCSN. “That was fun. I want to do that more. We’ve had just a terrible two months. The few races leading into the playoffs and then the playoffs, just none of it went our way, and man, it feels so good to come here and have such a solid night.”

Almirola’s other top five in the playoffs came at Talladega. Other than that his best finish since the July race at Daytona (7th) was 11th at New Hampshire on July 21. His only other top five of the season was at Phoenix in spring.

“Our Ford Mustangs were really fast,” Almirola said. “Just happy for all of our partners, finally to come here and run good all night. … I feel bad that we haven’t gotten them the results even though we’ve run good, and tonight just a great performance by everybody at Stewart‑Haas Racing.”

Almirola admitted the team’s past accomplishments have been a burden this year, where Harvick has been the only SHR driver to win.

“That’s the hard part about when you have a year like last year and we win 14 or 15 races as an organization, the expectations are really high,” Almirola said. “So when you don’t run like you’re used to, the morale in the shop can get a little down.  But we have such a great group of people at SHR and just a never‑give‑up attitude.  Everybody fights and keeps building new race cars and trying to learn and get better, and tonight was a prime example of that.”

Suarez was another consistent presence in the top 10. He led twice for 25 laps, the fourth time he’s led more than 20 laps in a race this year.

In his first season with SHR, Suarez claimed his fourth top five of the season. All four have have been split among both races at Texas and Michigan International Speedway.

“I feel like (Harvick and Almirola) just had a little bit more raw speed,” Suarez told NBCSN. “For whatever reason I feel like I was a little bit better than them in the long run, but on the sticker tires I just couldn’t go as fast as them. It was taking me 15 to 20 laps to actually get going. By then they were gone. … Stewart-Haas Racing did an amazing job. We brought very fast race cars this weekend. So it was fun. Hopefully, we can have more weekends like this to finish over there in victory lane.”

Suarez’ performance comes amid his negotiations with SHR to return to the No. 41 Ford beyond this season. His average finish through 34 races is 16.5, better than his 2018 total (18.5) but worse than his rookie total (16.2).

“I feel like honestly in the last few weeks we have had cars to perform the way that we performed today,” Suarez said. “But we have been with issues either on pit road or bad calls or stuff like that, but we’ve been pretty fast lately.  We’ve been running up front, top five, leading laps. Kansas was the same thing, Martinsville was the same thing.  It was nice to finally have a good strong car with a clean day.”

We had a really fast @SmithfieldBrand Ford Mustang all weekend and we were able to execute for the entire race. We had great pit stops, led laps, won a stage and finished second. We can build on that. 💪#SmithfieldRacing pic.twitter.com/uojP8VySGl

Proud of my team, we earned that Top 3 result! Good, clean, solid performance 💪🏼 And congratulations to my amigo @kevinharvick on his win tonight 🏁#SuarezNation pic.twitter.com/V1k9MC8HNW

Kevin Harvick led 119 laps from the pole to claims his fourth Cup Series win of the year Sunday at Texas Motor Speedway.

It is his third straight win in the playoff race at Texas.

Logano earned his first top-five finish of the playoffs.

With his win, Harvick tied Tony Stewart on the all-time wins list with his 49th victory.

There are now only two spots left unclaimed for four the championship race. 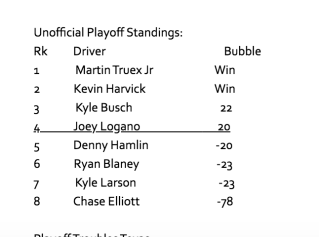 Denny Hamlin spun in Turn 4 and slid through the frontstretch infield with five laps left in the first stage Sunday at Texas Motor Speedway.

At the end of his slide, Hamlin’s No. 11 Toyota dug into the grass where it met pavement and briefly went airborne, causing some damage to his front spoiler. Hamlin’s team made repairs and he was able to continue and finished 28th, multiple laps down.

“Just got up into (the traction compound) before it was really broke in and just lost control, that’s all there is to it,” Hamlin told NBCSN. “We’ll go to Phoenix and try to win.”

Hamlin entered the race second in the playoff standings, 24 points above the cutline to advance to the championship race. He heads to the final elimination race in Phoenix as the first driver below the cutoff spot, 20 points behind Joey Logano.

“The car and the effort will be there,” Hamlin said. “There’s no doubt in my mind we can go there and win, especially in these circumstances.”

NASCAR executive: ‘Judgment call’ on whether a driver spins intentionally November 4, 2019 10:12 am