Two drivers racing for a win wreck on a restart, and a few crew members from each of their teams have words after the incident.

It seems like an everyday chain of events for a NASCAR race, but last Sunday took on new meaning after Joe Gibbs Racing suspended two employees on the pit crew of Martin Truex Jr., whose wreck with Kyle Busch triggered the argument.

The crew member who taunted Adam Stevens, Busch’s crew chief, was wrong. But Stevens’ decision to enter the pit box of the taunting crew member also was wrong.  The second crew member who screamed at Stevens made a forceful demand, but everyone in racing understands the unwritten rule of “don’t come in my pit area.”

No one threw a punch. No one was injured.

It was just some highly competitive people blowing off some steam — but two of the three won’t be at Pocono Raceway this weekend because they are employees of JGR.

To be clear, I haven’t won multiple Super Bowls as a coach, nor have I run a business with hundreds of employees, but I believe this is the incorrect precedent to set for crew members and the fans of the sport. I’m of the belief that most fans tune in to see individual drivers battle it out for wins and positions — not an individual organization made up of multiple teams.

Imagine Kyle Busch and Denny Hamlin having an on-track incident while racing for a win and then having words afterwards and the next week one is suspended because they are on the same team.

Oh, wait: That mostly happened during the 2010 All-Star Race at Charlotte Motor Speedway. What didn’t happen were suspensions for either driver.

How is this different? Because corporate decorum doesn’t allow an employee of lower stature to confront a “superior”? Has this sport moved in the direction that it’s OK to hold crew members within the context of a race to that standard?

I damn sure hope not.

I do not condone or approve of violence in solving problems, but that didn’t happen here.

I would not have supported a suspension for Kyle Busch when he threw a punch at Joey Logano earlier this year (NASCAR and JGR did not penalize Busch). But had the punch landed and caused an injury to Joey, I believe a substantial fine would have been appropriate.

None of those involved at Indy threw a punch, and yet two are sitting at home because of a decision by Joe Gibbs Racing (again, NASCAR wasn’t involved in any penalties).

This is wrong for the crew members and wrong for our fans.

Team members should have pride and passion for their individual teams. It should hurt like hell when things go badly, while winning should bring a feeling of success and accomplishment that compares with nothing else.

It’s the essence of NASCAR and all of sports. If they don’t have that passion, how can fans share it?

Multicar teams have provided security for team owners, drivers, employees and NASCAR itself, but they have also created some issues that are not so favorable — and this is clearly one of them.

Martin Truex Jr.’s fans are pissed off that Kyle Busch decided it was no longer time to play nice on restarts. Kyle Busch’s fans are furious that Martin lost control and took out Kyle and his chance to end a yearlong winless streak.

Why shouldn’t the teams be allowed to have the same emotions?

Normal corporate policies have no place in sports arenas where emotions are a requirement for success.

When the teams and drivers don’t care — or aren’t allowed to show their emotions in a reasonable way — then fans will certainly not be far behind.

And if that happens, we all are the losers.

The All-Star Race should be unique and offer something different from the rest of the schedule.

So next year, let’s make it one hell of a race. A knock-down, drag-out short-track show unlike any other.

Or any relevant short track within a day’s drive of the Charlotte area.

This will add a new measure of excitement to the All-Star Race. It’s good for the overall health of the sport while restoring its grass-roots passion as well.

Imagine if race fans had the chance to see Jimmie Johnson, Kyle Busch and Kevin Harvick at a three-eighths of a mile oval. Imagine a one-day show in which the pole-sitter spins a wheel from 1 to 12 after qualifying, and that determines the starting spot. Imagine if a $1 million prize was posted at a track that’s smaller than anything on the Cup circuit.

The cars will have too much horsepower, and that’s awesome.

They will weigh too much, and that’s awesome.

They will be sideways trying to get the rear tires to hook up, and that’s awesome.

The restarts simply will be fabulous.

When you can put drivers in situations where they really can get aggressive, how is that possibly wrong?

We would be delivering what the fans say they want: Hard racing, drivers working their guts out, and racing with something big on the line.

Drivers are doing all that now at Charlotte, but it’s hard to see some of those things at a 1.5-mile track.

A place like South Boston will challenge all the drivers and teams with a race that will be completely different than what you see the following week even though the rules are the same.

There will be no crazy formats. The reason those are needed is the racetrack, and a smaller racetrack helps eliminate the need for those rules to ensure good racing while embracing the history of the sport.

As a native, I’m naturally partial to South Boston, Virginia. But you could put the All-Star Race at a different short track every year, creating a process in which tracks lobby to hold the race. This would be great for some small-town economies but more importantly it would be great for the enthusiasm about the Cup Series.

The longtime fans who like the racing at North Wilkesboro Speedway again – this is a way to honor those traditions.

Bring in temporary grandstands to seat about 10,000 fans. This would create an incredibly difficult ticket to get, and that would help bring more excitement and enthusiasm for the fans to be there.

It’d be like the successful Camping World Truck Series race at Eldora, except this would be 10 times what you see there because it’s Cup.

It would bring big names to places like South Boston Speedway – imagine Virginia native Rick Hendrick entering the gates there. Or Chad Knaus, a future Hall of Fame crew chief.

It’ll be fun to watch and fun to do for the teams as a one-day show. Practice for a little more than hour, line them up and go. Drive to the track on Saturday morning and head home by midnight.

If there’s a downside to this idea, it’s one less event at Charlotte Motor Speedway, a track that’s just down the road from my house that I love.

But Speedway Motorsports Inc. executives Bruton and Marcus Smith would understand this concept. They have shown the utmost commitment to embracing NASCAR’s lower levels by running the K&N and Modified series at their tracks. They have promoted the youth of our sport.

I believe if Bruton and Marcus Smith looked at what’s best for the sport, they wouldn’t like to give any race up, but they gladly would participate because they have NASCAR’s best interests in mind.

They understand as well as anyone that if the fans are excited about the All-Star Race, that will make them more excited the next week to buy tickets for the Coca-Cola 600. The All-Star Race has historical significance at Charlotte. You generally don’t want to disturb tradition, but if you can help the overall health of the sport, you do that.

I understand that to some this idea is absolutely nuts but step back and consider the potential.

Taking today’s big-time drivers, teams and modern race cars to tracks that helped build the sport from the ground up. Embracing the hard-core fan and the roots of the sport and rewarding them.

This is no gimmick. It’s joining the past and the present to enhance the future.

A unique event and a unique facility producing the one thing that everyone wants, one damn good All Star race unlike any other.

Editor’s note: The debate over racing at Bristol Motor Speedway has raged since the track was repaved in 2007, changing its single-groove dynamics. NBCSN analyst Jeff Burton, who won at Bristol in 2008, was at the 0.533-mile oval this weekend, and he disagreed with the opinions of drivers who believe the high line should be an option. Here are the thoughts of Burton:

BRISTOL, Tenn, – The glory days of Bristol Motor Speedway remain fresh in my mind. The noise from the grandstands during prerace ceremonies was so loud, it felt as if the entire facility was vibrating. You could feel the energy and excitement throughout the weekend.

As a driver, I knew I was in for an extremely challenging event with a good chance that I would be caught up in something that would cost me a good finish. I was nervous, anxious, and damn excited to get it all going. And even though they weren’t driving, the fans had the same emotions.

“It’s Bristol, baby!” wasn’t built on top-lane, multi-groove racing. It was built on a single groove on the bottom.

That was where you had to be, and the race was to get there. Drivers did what they had to do to make that happen.

It was really hard to pass, so you had to move someone or rely on patience and ability to get it done. At times during the race, you had to make a hole to keep from losing everything you had gained through hours of work.

It created the racing that we all clamor to watch. It made winning mean more because it wasn’t just difficult. It was really damn difficult.

So now I hear some claim the track isn’t fun or racy with the groove on the bottom.

Well…. Bristol used to be fun..

Now, I do appreciate multi-groove racing but not at Bristol and Martinsville. The half-mile tracks aren’t 1.5-mile tracks, and that’s why they are special.

I do agree that when the groove moves to the top, it is better to have multi-groove racing, but I don’t think that’s as good as one lane on the bottom.

Let’s remember what created all of the memories and big moments for NASCAR racing at Bristol and Martinsville and understand that the path back to full grandstands and those great emotions at these tracks is clearly defined.

It’s by embracing and remembering what it used to be and doing what it takes it get it back.

Jeff Gordon, who had the last pick of pit stalls among Chase drivers, is in the 26th stall with Michael Annett in front and Ricky Stenhouse Jr. behind. 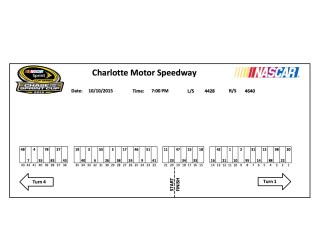 NBC analyst Jeff Burton, who race at Kentucky Speedway from 2011-13, gets behind the wheel to explain the intricacies of the 1.5-mile oval and where the track has made some improvements over the offseason.

Burton also explains why getting entering and exiting the pits can be a tall order, too.

Burton: Pit crew suspensions send the wrong message about the emotions that link everyone in NASCAR July 30, 2017 10:00 am

Burton: NASCAR drivers should remember that Bristol was built on the bottom, baby April 23, 2017 2:00 pm

Talladega Superspeedway will add SAFER barriers before NASCAR weekend in May March 19, 2015 6:01 pm