From Jeff Gordon wishing the drivers “good luck” to Denny Hamlin‘s photo-finish win, relive all the laps and emotion of Daytona 500 with Scan All Daytona.

DAYTONA BEACH, Fla. — Denny Hamlin led a fleet of five Toyota to the top of the speed chart in the second Sprint Cup practice Friday at Daytona International Speedway.

Hamlin’s No. 11 Toyota was fastest at 199.658 mph, followed by the Camrys of Kyle Busch, Martin Truex Jr., Carl Edwards and Matt Kenseth.

Truex and Kenseth both were in backup cars after crashing on the last lap of Thursday’s second Can-Am Duel qualifying race.

A total of 31 drivers made laps in the session. 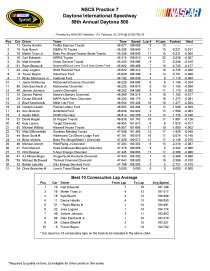 Here is what they had to say:

1. What are the key storylines you will be watching at Daytona during Speedweeks?

STEVE LETARTE: Daytona has always been a standalone event. I look at the rules being the same as last year, so it will be interesting if the same cars have speed in Daytona as last year. I’m sure the charter system will be the buzz in Daytona.

DUSTIN LONG: Three stand out to me.

— Richard Childress Racing has gone winless since Nov. 2013 (73 consecutive races) and last won a points race at a restrictor-plate track in Oct. 2011. Does the streak end this time?

— Defending Daytona 500 winner Joey Logano was brought to Team Penske by Brad Keselowski but Logano has topped Keselowski in wins during the past two seasons (Logano has 11 wins to Keselowski’s seven). How much higher can Logano go?

— Safety always is among the key storylines at Daytona. This year marks the 15th anniversary of Dale Earnhardt’s fatal crash and the first time Cup cars have been back on track since Austin Dillon’s terrifying crash after the checkered flag in July.

NATE RYAN: The storylines are the storylines – or, at least which emerge in the absence of Tony Stewart attempting the Great American Race for seemingly the final time. Until last week, I’d expected all the focus would have been on Stewart entering this race. Now it’s shifted, and that could offer a preview of how the series might change next year when he is gone for good.

–Hendrick Motorsports was dominant in the plate races last year (Dale Jr. probably could have won the first and last races of the season and won the middle events at Talladega and Daytona); can it maintain the magic?

–Does Joey Logano, who won the Daytona 500 and at Talladega in October, still have the goods?

— Kyle Busch has been strong enough to win this race multiple times, and there have been instances when the defending series champion opens with a Daytona 500 win.

–In the first race at the 2.5-mile oval since Austin Dillon’s horrifying crash, and on the 15-year anniversary of Dale Earnhardt’s death, there will be a focus on safety as part of the opening of the Daytona Rising project.

2. Who is the one driver you will pay close attention to during Speedweeks and why?

JEFF BURTON: I’m going to be watching Matt Kenseth and how he handles coming back from last year’s disappointment. It’s always difficult to be in the middle of that type of firestorm and then move on. He is a championship contender but needs to be able to put all of that behind him.

STEVE LETARTE: Chase Elliott. He is very talented and has always been very level-headed. How will he approach his first year in the 24?

DUSTIN LONG: Kurt Busch. He missed last year’s 500 because of a NASCAR suspension. He’s among the most talented drivers yet to win a restrictor-plate points race. Busch is a combined 0-for-59 in points races at Daytona and Talladega. However, he has finished in the top five 30.5 percent of the time and scored a top-10 finish in 50.9 percent of those races. He’s due.

NATE RYAN: Joey Logano. Daytona requires help and good friends, and Brad Keselowski is Logano’s lone teammate (though Ryan Blaney also will help). After the way many veterans piled on after Matt Kenseth’s shots last year, will navigating the draft be any more difficult for Logano?

Hendrick Motorsports will never be able to replace the impact Jeff Gordon had, but Jimmie Johnson is ready to take on the leadership role as the senior member to guide Dale Earnhardt Jr., Kasey Kahne, and rookie Chase Elliott.

NASCAR America: The case for Ray Evernham to be inducted into the Hall of Fame February 25, 2016 7:00 am

Hendrick Motorsports drivers look to a season without Jeff Gordon on the track (VIDEO) February 3, 2016 8:47 pm

Carl Edwards agitated as he learns of NASCAR’s decision to shorten Phoenix race (VIDEO) November 16, 2015 12:08 am