There will soon be an addition to Matt Kenseth’s family. On Wednesday, Amber Odom took to Twitter to announce her engagement to Matt Kenseth‘s son Ross.

The announcement was short and sweet.

“We’re engaged,” Odom tweeted followed by emoticons for a wedding ring, a palm tree depicting the Bahamas location of the engagement, and a smiley face with heart shaped eyes.

Social media has completely redefined the way fans interact with their favorite drivers these days, so it comes as no surprise that this was the vehicle for their announcement.

Ross Kenseth was a little more effusive, tweeting, “Thanks for all the kind words, really excited to spend the rest of my life with my best friend,” as well as individual notes to well-wishers.

Thanks for all the kind words, really excited to spend the rest of my life with my best friend @AmberOdom pic.twitter.com/fd2yPDQ2Zj

Points leader Chris Buescher struggled to a 13th-place finish, finishing one lap down.

Buescher leads defending series champion Chase Elliott by 18 points heading into next weekend’s season finale in Miami. Ty Dillon is 22 points back, while Regan Smith is 24 points back in fourth place in the standings. Buescher clinches the title by finishing 13th or better next week.

HOW BUSCH WON: Basically, it boiled down to Busch turning the ignition on. It was all downhill from there, as Busch dominated. He was never threatened, didn’t have to worry about running out of fuel, and simply enjoyed a leisurely and comfortable drive in the desert.

WHO ELSE HAD A GOOD RACE: Ty Dillon, Chase Elliott and Regan Smith all had strong runs and came home with finishes of fifth, sixth and seventh respectively. In so doing, they all closed in on points leader Chris Buescher. … Erik Jones, who all but clinched the Truck Series championship Friday night, finished third. Jones will complete the weekend triple, racing Sunday in place of the suspended Matt Kenseth.

WHO HAD A BAD RACE: Dylan Kwasniewski wrecked hard on Lap 57, finishing 34th. … Jeremy Clements also wrecked hard on Lap 112. He managed to get his car repaired quickly in the garage, but finished 30th, 14 laps behind the leaders. … Ruben Pardo, who won the season-opening race of the NASCAR Mexico Series at Phoenix, finished 38th.

NOTABLE: Even though he’s just 18 points ahead of Chase Elliott, Chris Buescher referenced the world championship.  “In the grand scheme of things, it was a decent day. We’re going to Homestead comfortable. I can finally use the word. We can go there and race, stay out of trouble and should be in good shape. … We’re not done yet.” … Ross Kenseth, in his second career Xfinity Series race, struggled to a 33rd-place finish, 51 laps off the lead lap.

QUOTE OF THE DAY: “18 (points) is really not much. It’s just 18 spots. That’s one mistake left or right, up or down, getting in the gas too soon and slapping the wall with the right rear and having an issue, just so many things can happen. I could sit here and name an endless amount. A lot of things can happen. We need to have a solid week and hope for the best.” – Chase Elliott, second in the standings to Chris Buescher by 18 points.

NEXT: The season-ending Ford 300, Nov. 21, at Homestead-Miami Speedway.

Ross Kenseth, 22, will start in the DAV Honoring America’s Veterans 200 for Hattori Racing Enterprises, the same team he made his Camping World Truck Series debut with last weekend at Martinsville Speedway.

“I’m really excited and thankful for the opportunity Shige Hattori has given me again,” Kenseth told Catchfence.com. “I feel like having the experience from Martinsville will help a lot, we didn’t really get the finish we deserved but that’s Martinsville. Pat Tyson (crew chief) and Bobby Burrell have put a lot of time and effort into this program going into Phoenix, so hopefully we can come out of there with a solid run.”

Kenseth finished 17th after starting 25th at the short track. He made his Xfinity Series debut at Chicagoland Speedway in June and finished sixth driving the No. 20 Joe Gibbs Toyota, which his dad drove at times this year. 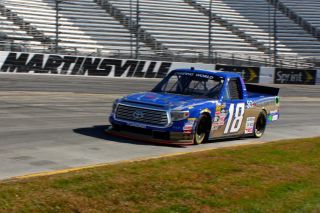