Gallagher left his No. 23 truck after a Lap 76 incident with Christopher Bell, whose truck he approached. Gallagher said he was concerned for Bell’s safety.

NASCAR also issued a written warning to the No. 18 Xfinity series team of Joe Gibbs Racing during the race weekend at Road America.

The No. 18, which was driven by Owen Kelly, failed pre-race laser inspection twice and received its fourth warning. A team loses pit selection after a fourth warning. There was only one inspection period prior to qualifying before cars were impounded.

The NASCAR Xfinity Series races today in the Road America 180 Fired Up By Johnsonville at Road America in Elkhart Lake, Wisconsin.

NBCSN will televise the race. Coverage begins at 2:30 p.m. ET on NBCSN with Countdown to Green. The green flag is expected to fall shortly after 3 p.m. ET.

Veteran road course specialist Alex Tagliani starts from the pole. Michael McDowell is on the outside of the front row.

Justin Marks, who won two weeks ago in the rain at Mid-Ohio, will start from third position and is looking for his second career Xfinity Series victory.

Owen Kelly and Daniel Suarez round out the top five starters.

If you’re not near a TV, you can watch online or on the NBC Sports app at the NASCAR stream on NBC Sports.

If you plan to stream the race on your laptop or portable device, be sure to have your username and password from your cable/satellite/telco provider handy so your subscription can be verified.

Click here at 3 p.m. ET to watch live via the stream.

Alex Tagliani will start from the pole at Road America after a lap of 109.866 mph in Xfinity Series qualifying on Friday night. It was Tagliani’s fourth career pole in his eighth start.

Tagliani enters the Road America 180 looking for his first career NASCAR win. He will lead the field to the green flag alongside Michael McDowell, who qualified second at 109.591 mph. McDowell is driving the No. 2 for Richard Childress Racing.

There were two incidents during qualifying, both in the first round, which brought out red flags.

Alon Day, making his second Xfinity Series start, went off track and was stuck in the gravel in Turn 12. Day did not complete a lap and will start 40th on Saturday afternoon.

The second red flag was for rookie Josh Bilicki. He spun and crashed into the tire barriers in Turn 1, resulting in heavy damage to the right side of the No. 77. Bilicki had clocked in 23rd fastest at 107.092 mph at the time of the accident. 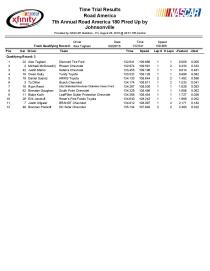 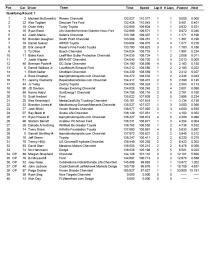 Justin Marks, who won at Mid-Ohio earlier this month, was the fastest in Friday’s final Xfinity Series practice session with a lap of 108.946 mph. 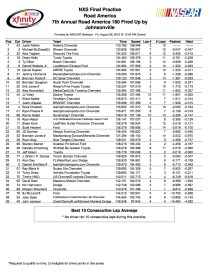 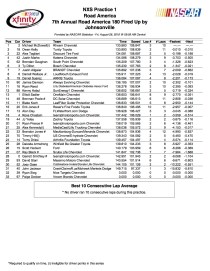