Alex Labbé, the defending champion of the NASCAR Pinty’s Series in Canada, will compete full-time in the Xfinity Series this season.

The native of St. Albert, Quebec, will drive a Can-Am sponsored car owned by DGM Racing, which is operated by fellow Canadian Mario Gosselin.

The news was first reported by Le Journal de Montreal.

Can-Am sponsored Labbé in NASCAR’s Canadian series, where he drove for GoFas Racing and won six races the last two seasons, including five in his championship campaign. He earned 11 top fives and 12 top 10s last season.

He will race at Daytona International Speedway for the first time when the series opens there on Feb. 17.

Labbé took part in an ARCA Racing Series test at Daytona in January to gain experience on the track.

The team’s cars will be built by Richard Childress Racing and prepared by Gosselin at a shop in Lake Wales, Florida.

It’s finally official, I will be running the entire 2018 @NASCAR_Xfinity Championship!! 😃🏁 https://t.co/V1kUFHYYFj

Saturday’s Xfinity Series season-opening Powershares QQQ 300 has been red-flagged twice in less than the first 30 laps.

The first red flag was the result of a major wreck that involved 18 cars. The pack was on Lap 23 of the scheduled 120-lap event when several drivers made contact, setting off a chain reaction crash.

The race went back to green flag racing on Lap 28 when yet another multi-car wreck – this time 12 cars – took place one lap later on the back straightaway, bringing out the red flag once again.

The second wreck occurred one lap before the scheduled end of the first of two stages in the race.

When the racing resumed following the second wreck, of the 40 cars that began the race, only Elliott Sadler, Ty Dillon, Ross Chastain, Dakoda Armstrong, Brennan Poole, Joey Gase, Brendan Gaughan, Kasey Kahne, Mario Gosselin and David Starr had not been involved in wrecks.

Friday night’s Subway Firecracker 250 at Daytona International Speedway has morphed into a wreckfest in the early going.

But that was just an appetizer of bing-bang-boom racing when 14 cars crashed on Lap 15.

“I seen the 6 (Wallace) side draft the guy in front of him and the 48 (Brennan Poole) just got into him,” said Austin Dillon, who led 10 laps before he was collected in the crash, which took his team six laps to repair before returning. “It’s just a product of guys trying too hard, too early, and a competition caution 10 laps from now. … It’s just speedway racing.”

The race was red-flagged two laps later, on Lap 17. The delay lasted 7 minutes, 40 seconds before the yellow caution flag was displayed.

The race resumed on Lap 22.

With three laps to go on the final restart, Jones got a great jump, passing Busch, his Joe Gibbs Racing teammate, and then set his sites on Larson.

After at least two times where their cars touched, Jones got past Larson to take the victory.

“I figured at some point we’d get a win,” Jones said. “I knew it would be a tall task to do it at Bristol. It’s a big day for us.”

In addition to being the first full-time Xfinity Series regular to qualify for the Chase for the championship, Jones also won $100,000 for capturing the first of four Dash 4 Cash races this season.

“Restarts for us were horrible today,” Busch said. “It’s frustrating when you’re in position, have a chance and you just throw it away. (Jones) deserves to win.”

Added Larson, “I definitely didn’t want to see that caution and knew I was tight on short runs and just did a really bad job on that restart, a really, really bad job. I felt, I know, I gave that one away. It hurts to lose one like that.”

HOW JONES WON: Pure patience. Jones took advantage of a great jump on the final restart, traded fenders a couple of times with Larson and then motored to the win. Jones led 62 of the 200 laps.

WHO ELSE HAD A GOOD RACE: The battle between Larson and Busch was the story of the day. Larson led a race-high 94 laps, while Busch led 43 laps. But neither could stop Jones on the final restart and had to settle for second (Busch) and third (Larson). … Justin Allgaier had a strong run, as did Daniel Suarez, finishing fifth and sixth respectively.

NOTABLE: Jones announced after the race that his father was diagnosed with cancer in the last month. He cried in Victory Lane while talking to his parents on the phone. … This was Jones’ third career victory in 33 Xfinity Series starts. … Jones moved up three spots and into second place in the Xfinity Series points standings. Joe Gibbs Racing teammate Daniel Suarez remains atop the points with a six-point lead over Jones and an eight-point edge over Allgaier.

QUOTE OF THE DAY: “The two cars that were the class of the field didn’t win,” – Kyle Busch on the race-long battle he had with Kyle Larson.

WHAT’S NEXT: ToyotaCare 250 on April 23 at Richmond International Raceway

Just like Erik Jones did in the first Xfinity Series heat race Saturday afternoon, polesitter Austin Dillon led all 50 laps in the second heat race prior to the Fitzgerald Glider Kits 300 at Bristol Motor Speedway.

Ty Dillon and Suarez become eligible for the $100,000 Dash 4 Cash contest that will be part of the main event, joining the two top finishers in the first heat race, Erik Jones and Justin Allgaier. 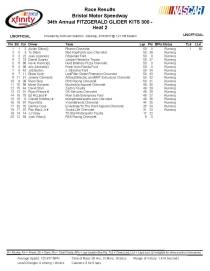