Contact on the final lap of the Fr8auctions 250 at Talladega Superspeedway between Timothy Peters and Noah Gragson sent one driver spinning and the other to victory lane.

Peters made contact with Gragson’s right rear quarter panel while battling for the lead, sending Gragson’s truck into the wall. Peters was ahead of the field as the caution waved to freeze the field to score the win.

“My spotter said clear coming down to the tri-oval and I just didn’t get cleared enough,” Peters said. “I had my teammate coming on the outside and had a good push … to the outside and it was just formed up quicker, better trucks, coming off of Turn 2. We’re coming down to the checkered flag and we’re trying to make the best of it. Noah is going for it, too. Was it a block? At that point it didn’t matter, I wasn’t going to lift. I hated the outcome that it was but it feels good to cross that finish line knowing we won that race.”

Myatt Snider finished second with David Gilliland third. Justin Haley, who was already locked into the Round of 6 with his win at Canadian Tire Motorsport Park, finished fourth. Wendell Chavous placed a career-best fifth in what he said would be his last series race.

Ben Rhodes and Stewart Friesen were eliminated from title contention.

Stage 1 and Stage 2 went caution-free with a few close calls. It boiled over in the final stage. On lap 59, Chris Fontaine changed lanes from the high side and came across the nose of Haley. Fontaine spun into Johnny Sauter and then shot back up the track. When the smoke cleared, 10 trucks were heavily damaged, including those of points contenders Matt Crafton and Ben Rhodes. Also involved were Parker Kligerman, Spencer Gallagher, John Hunter Nemechek, Bo LeMastus and Justin Fontaine. The accident brought out a red flag that lasted 11 minutes, 42 seconds.

Gragson tweeted after the race that there were no hard feelings toward Peters.

Just hard racing in my opinion. 25 did nothing wrong. We all have a race to go win! Just part of it. I still had fun👍🏼

WHO HAD A BAD RACE: Tanner Thorson (31st) got turned out of the draft with three laps remaining in Stage 2, collecting Brett Moffitt. Early in the final stage, he cut a tire and spun in a single-truck incident. … Making his fourth start of the season, Parker Kligerman (28th) pinballed his way through the Lap 59 accident and made heavy contact with the inside wall. … Coming off Turn 4, Todd Gilliland (20th) made contact with Enfinger with 11 laps remaining while battling for the lead. Gilliland made heavy contact with the inside wall.

QUOTE OF THE RACE: “That’s Talladega. That’s what we race here for: wild wrecks and crazy finishes. … We had a great first two segments and then got hooked in the right rear in that one,” Crafton said on Fox after being involved in a Lap 59 accident.

Kligerman’s other series victory came in 2012 at Talladega. Just like then, he planted the checkered flag in the frontstretch grass.

“Everything is just a blur,” Kligerman said. “Every move worked perfectly. When I go back and look at it, I’ll look at those moves, some of the hardest to make are when you are in the bottom and you’re running the top five and you don’t really have a partner and you’re trying to stop or block that top lane or get that momentum of that top lane. All I think about these speedway races is literally the last three laps and what I’m going to see out of the right rear of my truck because the move that you make to win these races 90 percent of the time is that.”

Kaz Grala, who was involved in an early wreck, and Chase Briscoe, who had mechanical issues early, were eliminated from playoff contention.

Advancing to the Round of 6 are Bell, Ben Rhodes, Matt Crafton, Johnny Sauter, Austin Cindric and Nemechek.

How Parker Kligerman won: He avoided issues early, put himself in the right spot and took the lead on the overtime restart to win.

Who had a good day: John Hunter Nemechek finished sixth after being in an accident and avoiding two others later to advance in the playoffs despite entering the race last among the playoff contenders, 14 points out of a transfer spot. … Christopher Bell finished second for his fourth consecutive top-three finish. … Myatt Snider finished a career-best third.

Who had a bad day: Daytona winner Kaz Grala’s playoff hopes ended when he was involved in a crash on Lap 19. Chris Fontaine spun and Grala was involved in an incident when he was hit from behind and sent into the wall. Grala finished 29th. … Chase Briscoe’s truck started smoking on lap 6 and went to the garage on Lap 8 after fluids were leaking. He returned 10 laps down and finished 22nd, nine laps behind the leaders but it wasn’t good enough to advance in the playoffs.

Notable: Parker Kligerman led only three of 95 laps, including the final two.

Quote of the day: “That’s a tough one,’’ Kaz Grala said after a wreck prevented him from advancing to the next round of the playoffs.

Next: Oct. 28 at Martinsville Speedway

Chris Fontaine, who is making his first start in the Camping World Truck Series this season, was the surprising fastest driver in Friday’s second and final practice at Talladega. 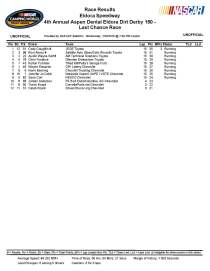 Also transferring to the main event of the Camping World Truck Series race at Eldora Speedway were Spencer Gallagher, Brandon Brown, Timothy Peters and Tyler Young, who nipped Chris Fontaine for the last transfer spot with a last-lap pass.

Norm Benning, who memorably made the main event three years ago after a qualifying collision, finished last and will attempt to transfer through the last chance race. 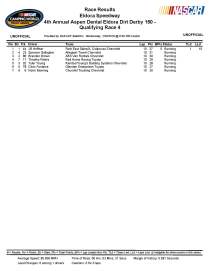