John Hunter Nemechek says he wished he and Cole Custer hadn’t ended in the grass coming to the checkered flag in Sunday’s Camping World Truck Series race but defended his actions and called their duel “a racing incident.’’

Nemechek made his comments Wednesday morning on SiriusXM NASCAR Radio’s “The Morning Drive.’’

Nemechek, who was running second on the final lap at Canadian Tire Motorsports Park, said he owed it to his team to attempt to win the race.

Custer, who needed the win to make the Chase, didn’t see it that way. He told SiriusXM NASCAR Radio on Tuesday that if Nemechek “steps over the line” in the season’s final eight races, “something’s going to happen.’’

Nemechek said he isn’t worried about what Custer might do.

“We raced hard,’’ said Nemechek, who collected his second win of the season Sunday. “We didn’t put him in the tire barriers. It could have ended up like Ty Dillon a couple of years ago (contact from Chase Elliott sent Dillon into the tire barriers and he finished 17th). You have to look at all from all angles. It was a racing incident.

“We both ended up crossing the finish line 1-2. It’s just good hard racing. You can go back and watch the replay of Kyle Busch and Cale Gale a couple of years ago from Homestead. They came to the line 1-2 in a  drag race. I would expect him to do the same thing. If I was in his position, leader at the end of that race, I would have been expecting the same thing as well. As the leader you’re trying to block, you’re trying to win the race. It’s just kind of circumstances that happened weren’t the best.’’

As for anything he would have done differently, Nemechek said there would have been one thing.

“The only circumstance that I would try to change is try not to get loose underneath him and us touching and us ending up in the grass,’’ Nemechek told SiriusXM NASCAR radio. “I definitely think I had the momentum coming out of the corner. If I didn’t get loose, we were still going to drag race to the line and we still could have won the race. That’s the only circumstance that I would have changed. I hate that it ended that way, but you can’t really control that.’’

Since the end of the race, Nemechek has faced criticism for his actions coming to the checkered flag from some drivers.

“I have seen those comments, some of them you take and you look at it and you go back and watch replays and stuff,’’ Nemechek said. “I think as drivers, if you were the leader in that situation, you always know what the guy behind you is going to do. You’ve raced with them before and you know how they race and you put them in your shoes. You always race how you want to be raced or you think you’re going to be raced by that guy. That’s kind of how you just have to take it.’’

Friday night brings the season finale for the Camping World Truck Series at Homestead-Miami Speedway with the Ford EcoBoost 200.

There are 32 Truck on the preliminary entry list for the race, including Sprint Cup driver David Gilliland.

The last four Truck races at the 1.5-mile track have been won by different drivers. Darrell Wallace Jr. won in 2014. Before that it was won by Kyle Busch, Cale Gale and Johnny Sauter. 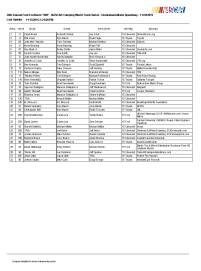 John Hunter Nemechek says contact with Cole Custer at end of race was ‘A racing incident’ September 7, 2016 10:12 am