The end of each NASCAR season provides a chance for reflection … and a time to go back and look at the many photos taken at the track. Here are some photos I took in 2019 and what made them stand out to me.

If you’ve been to a race, you’ve likely seen pit crews stand in their pit box and wave to their driver as they pass by on pit road before heading to the track to begin the race (at least at races where cars are staged on pit road).

The Richard Petty Motorsports pit crew, though, waves to every vehicle that passes them on pit road. Often drivers will wave back.

“If you don’t wave at them, you actually feel bad because they’ll like make sad faces,” Martin Truex Jr. said. Above was the scene at Charlotte in May on All-Star weekend.

After each event, one of the biggest races is for the spotter of the winning team to make it down from atop the press box to Victory Lane to celebrate with the team. Sometimes the spotter can’t make it down in time before photos begin to be taken.

Spotter Chris Lambert makes sure to get a picture with his driver, Denny Hamlin, after each win because Lambert often misses the group pictures. This photo is of them after Hamlin’s win at ISM Raceway put the No. 11 driver in the championship race.

But there is more to Lambert than being the voice that tells Hamlin “clear” or “inside” or “outside.” His first wife and infant son were killed in a car crash 20 years ago. After the tragedy, a series of seemingly unrelated events over the next few years led him to marry one of his wife’s best friends. Before each race, Lambert honors the family he has and the one had.

The intensity on Cole Custer‘s face is striking in the moments after he finished second for the Xfinity Series championship for the second year in a row in Miami.

Custer moves up to the Cup Series in 2020, joining a talented rookie class that includes two-time Xfinity Series champion Tyler Reddick and Christopher Bell. This could be one of the best rookie of the year races in recent years.

This photo is of artwork in the Talladega Superspeedway media center celebrating 50 years of NASCAR racing at the track.

After I tweeted the photo, I was a bit surprised by the reaction from fans and their comments about the artwork. That’s one of the things I’ll remember most about this picture.

Of course, seeing some of the sport’s most famous cars on track together also was memorable.

Another special story on pit road in 2019 was the return of Daniel Smith, rear tire changer for Kevin Harvick’s team.

Smith’s last event of the 2018 season was the Bristol night race before he was treated for testicular cancer. His treatment included four rounds of chemotherapy, which consisted of one week in a hospital and two weeks of recovery each time. Still, he continued to work out in the hospital.

Smith returned at Daytona in February. He remained on pit road through the Bristol night race this past season until surgery to remove lymph nodes in his lower abdomen. He returned to his job on pit road at Talladega Superspeedway in October. 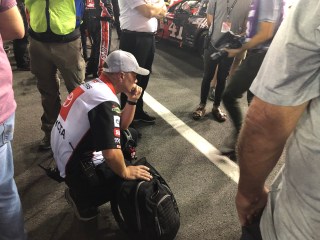 Nothing else needs to be said as Mike Wheeler, crew chief for Matt DiBenedetto, stares at the damaged left front corner of the car after DiBenedetto finished second in the Bristol night race. Photo: Dustin Long