ARCA has announced the 2020 schedules for the ARCA Menards East and ARCA Showdown Series.

The East schedules features seven races that provide a mix of short-tracks and national series companion events. The stand-alone schedule will allow for competitors to compete for the new 10 race Showdown championship.

The ARCA Showdown will include several traditional East race dates, including the combination races at Iowa Speedway and WWT Raceway at Gateway. Its schedule begins March 6 at ISM Raceway and ends Sept. 26 at Memphis International Raceway.

The complete NBCSN schedule for the ARCA Menards Series East, including broadcast times, will be released at a later date. 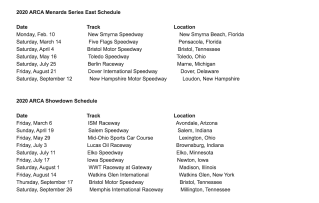