After its second weekend off in three weeks, the Xfinity Series heads to Texas Motor Speedway this weekend to continue the Round of 8 in its postseason (8:30 p.m. ET Saturday on NBCSN).

It does so after a first-time winner and a post-race scuffle at Kansas Speedway.

Brandon Jones shook up the Round of 8 with his Kansas win, which came after his elimination from the playoffs.

He was the second non-playoff driver to find victory lane in the playoffs, following AJ Allmendinger‘s win at the Charlotte Roval.

The eight remaining playoff members only have two races left to secure a spot in the championship four, either through wins or points.

Here’s how the playoff field looks ahead of Saturday night’s race.

Drama at the Top

The “Big 3” of Christopher Bell, Cole Custer and Tyler Reddick have seemingly been racing among themselves most of the season.

After combining to win 19 of the first 30 races, only 12 points separate the three drivers heading into Texas. But the fourth driver in the standings, Justin Allgaier, is 35 points behind Reddick.

Then Custer and Reddick got into their pit road scuffle, adding a nice dose of drama to their championship battle.

Custer enters the weekend trying to defend his win in last year’s O’Reilly Auto Parts 300, which was his first victory of 2018.  Since then he has seven wins, two of them coming on 1.5-mile tracks (Chicago and Kentucky).

Bell and Reddick each have one win on 1.5-mile tracks this season. Bell enters the weekend with three straight finishes outside the top 10, the longest stretch of his career.

Bell said his team will “100%” be more conservative this weekend than they would be otherwise.

“This weekend winning would be ideal, but we need to go there and we need to survive,” Bell said Thursday on SiriusXM NASCAR Radio’s “SiriusXM Speedway. “I think if we go there and survive and have a day like we should, we’ll be close to be locked in on points going into Phoenix then we can attack hard at a place we know we’re very capable of winning at.”

Reddick finished second at Texas in the spring and is the most recent winner on a 1.5-mile track.

“With the PJ1 (Texas) put down in the spring, it really opened up the second, third and even fourth lane in that compound up off the bottom groove when the balance of the cars would change,” Reddick said in a media release. “You don’t see a lot of tire fall-off there, but it’s similar to Kansas where you have a balance change in your car throughout a run. You have to stay on top of that to run well, and I think moving around throughout the race will be important. The pace will be very fast this weekend with the cooler temperatures we will have there.”

While there’s a massive gap between him and the “Big 3,” Allgaier doesn’t have much wiggle room with the drivers behind him in the standings.

Allgaier, who is winless in the last 38 races, enters the weekend with only two points separating him and Chase Briscoe, the first driver below the cutline.

Briscoe, who placed fourth at Texas in the spring, will try to bounce back after he was involved in a controversial wreck with Bell and the lapped car of Garrett Smithley at Kansas while Briscoe led. He rebounded to finish third.

“Honestly, my confidence level is super high right now,” Briscoe said in a media release. “We have had one of the fastest cars, if not the fastest, the last three races. We keep knocking on the door of another win, but things just haven’t been falling our way when it comes down to it. I expect to have a great car once again at Texas and I think we’ll be able to put together a better weekend than we had in the spring for sure.”

Running out of Time

Two of the last three drivers in the standings are JR Motorsports’ Michael Annett (-12 points) and Noah Gragson (-17).

Sitting at the very bottom of the standings is Team Penske’s Austin Cindric, who is 30 points back from the cutline.

The gap is the result of a miserable Kansas race for Cindric, who was involved in three accidents and had multiple flat tires.

The only Xfinity regular outside the “Big 3” with more than one win this year, Cindric is in dire need of another win if wants to make the championship four.

Here are the playoff standings ahead of Texas. 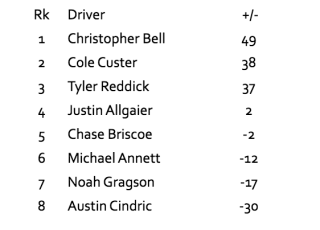