KANSAS CITY, Kan. – Kyle Larson says he plans to drive the full distance Sunday at Kansas Speedway despite injuring his ribs in “probably the hardest hit I’ve ever had.”

Larson’s No. 42 Chevrolet ran into the No. 88 Chevy of Alex Bowman near the end of the second stage of Monday’s race at Talladega Superspeedway (video above). 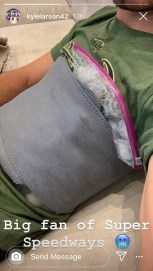 Though the Chip Ganassi Racing driver hasn’t had an X-ray, Larson doesn’t think he broke his ribs, but they were hurting enough to require an icing after two Friday practices at Kansas. Larson posted a photo to his Instagram Story of his wrapped midsection with the caption, “Big fan of Super Speedways.”

“Because everybody says there really is nothing you can do about ribs anyway,” Larson said when asked why he hadn’t gotten an X-ray. “It’s not broken. It definitely hurts to sneeze and cough, and when I’m in the seat, it’s tender. I’ve never broken a bone, but it’s definitely not broken.

Though he already has secured a spot in the third round of the Cup playoffs through his Oct. 6 victory at Dover International Speedway, Larson said he will run the 400 miles Sunday.

“Yeah, I think so,” he said after qualifying fifth Saturday, pausing to smile. “As long as I don’t hit the wall or anything. It should be fine.”

Larson also crashed in the April 28 race at Talladega, going airborne and rolling several times in a wreck that was reviewed by NASCAR.