Did you miss the Xfinity Series last weekend?

While Cup and Truck Series teams battled it out at Talladega Superspeedway, Xfinity teams were enjoying a much deserved week off after 15 straight weekends of racing.

Now it’s time to go back to work this weekend at Kansas Speedway (3 p.m. ET Saturday on NBC),as the Round of 8 begins. Texas Motor Speedway and ISM Raceway complete the round.

Here’s how things looks for the eight remaining playoff drivers.

The second round begins with the “Big 3” of Christopher Bell, Cole Custer and Tyler Reddick still holding sizable points advantages over the rest of the field.

In the reseeded standings, Bell is 48 points above the cutline and leads Custer (+36 points) and Reddick (+30). Bell and Custer padded their playoff point totals (62 for Bell and 50 for Custer) with their respective first round wins at Richmond and Dover.

Reddick (44 playoff points) will try to rebound from a lackluster first round where he only had one top five (Charlotte Roval) and finishes of 10th and 12th.

Bell earned his first career Xfinity win at Kansas in 2017 but was eliminated in a wreck on the first lap of this race last year.

While Custer was also involved in the Lap 1 crash and finished 26th, he rebounded in the Texas race to earn his first win of the year. Entering this weekend he has finished 10th or better in the last seven races.

“I think we need to go in the same way we have all year and that mentality is that we will have one of the cars to beat when we unload,” Custer said in a press release. “All year we have had speed off the truck and that has shown in practice speeds along with our seven wins. If we keep our heads up at these tracks that haven’t been kind to us in the past, then our luck is sure to turn around at some point and our goal is for that to happen this weekend in Kansas.”

Outside the prolific “Big 3”  – who have won 19 of 29 races so far – the most consistent drivers this season have been Austin Cindric, Justin Allgaier and Chase Briscoe.

Cindric (+3 points above cutline) remains the only non-“Big 3” Xfinity regular with more than one win this season. He earned the most points in the Round of 12 with 146.

Allgaier (-3 points from cutline) is winless in his last 37 starts. He earned the second most points in the first round with 145. In this round last year, his best result was fifth at Texas, sandwiched between a 38th at Kansas (Lap 1 wreck) and a 24th at ISM Raceway.

Briscoe (-4 points) enters Kansas with tops 10s in 12 of the last 13 races. The Stewart-Haas Racing driver finished ninth or better in all three first round races.

“We’ve been running pretty well recently and have really shown a lot of speed, so hopefully we are fast right out of the box when we get to Kansas,” Briscoe said in a press release. “We have had two straight poles (Charlotte and Dover) and probably should have had two wins in those races. It’s all about sealing the deal now and capitalizing on the speed that we have shown these last few weeks. I feel like Kansas and Texas are my two best tracks in this round and we’ll look to have a couple great runs, ideally a win, and get ourselves in solid position for the championship round.”

The last two spots in the Round of 8 are occupied by JR Motorsports’ Michael Annett and Noah Gragson.

This is the deepest in the playoffs that Annett (-8 points) has reached since returning to the Xfinity Series (two visits). He had two top 10s in the first round and has not finished worse than 15th in the last 13 races.

Outside of Allgaier, Gragson (-12 points) is the only other remaining playoff driver without a win this season.

He had one top five in the first round (fifth at Charlotte Roval) and two seventh-place finishes. 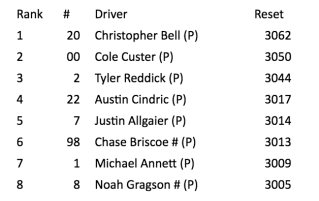