The title hopes for four Xfinity Series drivers will come to an end this weekend when the playoff field is trimmed to eight after Saturday’s elimination race at Dover International Speedway (3 p.m. ET on NBCSN).

Here’s a breakdown of the situation each playoff competitor finds himself in heading into the Monster Mile:

The two drivers lead the series in wins, with Bell claiming seven (tying his 2018 mark) and Custer winning six times.

Bell has won the last two Xfinity races at Dover.

Tyler Reddick, the third member of the “Big 3” this year, is all but assured a spot in the second round if nothing unexpected happens Saturday. He finished third at Dover in the spring.

Austin Cindric, the only Xfinity regular outside the “Big 3” to win multiple races this year (two), is also essentially assured a spot in round two. He finished sixth at Dover in the spring.

The next batch of drivers aren’t necessarily in trouble, but one accident in the first stage and an unexpected DNF could spell trouble.

Justin Allgaier in fifth is the highest driver in the standings who hasn’t won this year. He’s 40 points up on the cutline and has 12 playoff points. He finished second at Dover in the spring and won the spring race in 2018.

Chase Briscoe trails Allgaier in the standings in sixth. He’s 35 points up (and has 13 playoff points) on the cutline after a stage win and a ninth-place finish at the Roval. He finished fifth at Dover in the spring.

Noah Gragson is seventh in the standings, 26 points above the cutline. He had a top five on the Roval and enters this weekend’s race with six straight top 10s. He finished 19th at Dover in the spring after experiencing a loose wheel.

The last five drivers in the standings need some help to make it to the second round or they have to win.

Michael Annett is on the bubble and 11 points to the good. Annett is the lowest driver in the standings with a win. He has nine playoff points. Annett finished 10th in the spring Dover race.

That leaves the four drivers who find themselves outside the cutoff line.

John Hunter Nemechek and Brandon Jones each trail Annett by 11 points. Nemechek has no race or stage wins this year and has just two top 10s in the last six races. He’s finished in the top 10 in the last two Dover races.

Jones has no race victories, but has three stage wins and four playoff points. He has top 10s in the last three Dover races, but has the worst career average finish at Dover among the playoff drivers (19th).

Not much has gone well for Ryan Sieg (-37 points) and Justin Haley (-39) in the playoffs. After finishing outside the top 10 at Richmond, mechanical problems resulted in brief trips to the garage for both drivers at the Roval as they finished well off the pace.

Neither driver has won a Xfinity Series race, but that’s what they will need to do Saturday to continue their playoff hopes.

Sieg’s 11th-place finish in the spring was his best Dover result in 11 starts. Haley placed 17th in his first career Dover start.

Here are the playoff standings heading into Dover: 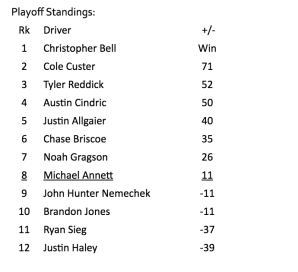