JTG Daugherty Racing car owner Tad Geschickter said Wednesday that the team was in “the final strokes” of a contract extension with Chris Buescher before Buescher’s move to Roush Fenway Racing in 2020 to replace Ricky Stenhouse Jr.

Buescher’s departure leaves JTG with an opening for next season with the No. 37 car.

“We were in the final strokes of the contract when learning that Chris has gone in a different direction,” said Geschickter said in a statement. “We appreciate all of the efforts from Chris through the past three seasons at JTG Daugherty Racing. When the dust settles, we will begin the process of searching for our next driver to fill the No. 37 seat for the 2020 Monster Energy NASCAR Cup Series season.”

Daugherty said that the team had only recently found out that Buescher could be moving to another team.

“We had somewhat of an idea the last day and a half that this possibly could happen,” Daugherty said on SiriusXM NASCAR Radio. “We didn’t understand why it would happen, working very hard, going back and forth trying to get all of our numbers together, trying to get the contract done. We get to today and find out he’s going to go in a different direction.Totally caught us off guard because we were already building stuff for next season as everybody else does, getting ready and preparing.

“We were in the full throes of trying to put something significant together and thought we had it done, pretty close to it, and things changed. Just like that.”

Buescher has been with JTG Daugherty Racing since 2017. His contract expires after this season.

“This catches you really by surprise this late in the year, especially,” Daugherty said. “You’re trying to be as professional as you possibly can about how you handle these situations. I don’t ever blame any athlete if he thinks he’s putting himself in a situation that is going to be better for him and his family, got no problem with that. it’s just for us, it’s always the timing. Getting this late in the season when you have commitments, it makes it very, very difficult to swallow this easily. … We’ll just say it’s a very, very difficult time go though this thing, but we have very smart people who work at our company.

“We’ll figure it out. We just wish the timing could have been different, a little more flexible toward us, but it’s not working out this way. Chris will move on and do his thing. We’ve put a lot of time and resources into Chris. We think we helped him become a better race car driver. As he moves on, we’ll look for the next young man or young woman that wants to get into our race car and try to help us continue to build what we’re trying to accomplish, which is winning races on (the track) and being successful off (the track) business wise.”

As to what type of driver the team will look for to take over the No. 37 car, Daugherty told SiriusXM NASCAR Radio:

“We like to give people a chance. We’ve done that with Ryan Preece. … You always like to have, since Ryan is a rookie, a veteran to go with that. I think that’s what helps make us work.

“I think it would be difficult to have two guys in the series or someone in the series with Ryan who doesn’t have any experience. That would be just absolutely, that would be miserable at times. We’re going to look. We would like to find someone with some experience we can continue to grow. We’ve taken good steps with that 37 car this year, really positive steps. We’d like to continue that. We don’t want to go backwards. It’s a tough situation to be in as an owner and a team, but we’re pretty resilient and we’ll figure it out. We’re going to give somebody a heck of an opportunity.” 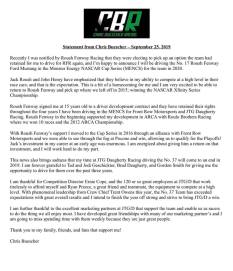