If in recent years you’ve longed for a NASCAR video game simulator that just had a little bit more of everything, that game will be available to you Friday.

It arrives with the fourth edition of the “NASCAR Heat” franchise from 704Games.

The overhaul of the game is evident from the main menu screen, which is broken up into window-like boxes, and clearly felt in the gameplay itself.

Here’s a breakdown of what you can expect when you fire up your PlayStation 4, Xbox One or PC to play the latest NASCAR game.

THE THRILL IS BACK

The best part about this revamped game is the enhanced racing physics, which the player has even more control over.

In the last edition of NASCAR Heat, overshooting a corner and sideswiping a CPU car would result in … a thud, mostly. It was very hard for any kind of crash – intentional or accidental – to develop.

But now, getting into a car’s left or right-rear quarter panel is more likely to result in a “will they or won’t they” situation, with you having to decide whether to step on the gas or hit the brakes not knowing whether the car will correct itself or go into a slide.

And you can make it easier or harder for that to happen.

704Games has added sliders in a settings menu which allow you to adjust a multitude of aspects to the physics and gameplay:

These adjustments are welcome. With that said, it took a lot of trial and error to find the settings that made racing for eighth entertaining, which is a fun sentence to write. Fun tracks to conduct those trials on are Darlington, Bristol, Dover and Charlotte.

Also, if you’re one of those who have no clue how to make adjustments to tire pressure, track bars or brake bias, 704Games has an easier option available.

At the menu you see in-between practice, qualifying and a race, the upper right-hand corner has a slider where you can simply adjust from “tight” to “loose.”

Further, AI cars are no longer glued to the inside line. You’ll see cars traverse the track all the way up to the wall. This makes coming up through the field a more challenging experience.

Though wrecks are more frequent now, as a player you still can’t DNF yourself in the middle of the race after a bad enough wreck to warrant it. You can go to the pits and be repaired like nothing happened. Sometimes you’ve had enough and you just want the race to end and move onto the next.

On the plus side, in career mode you can simulate races you don’t want to take part in.

EASY ON THE EYES

More care has been put into the visuals for this installment. The atmosphere at tracks, especially night races, is really striking. It’s even more apparent now that day will transition into night if you go with stage races.

At some tracks, like Darlington, the far end of the track always has a haze over it.

But in general, almost every aspect of what you see on the screen stands out more.

On Blaney’s car, the dripping paint aspect of it really sticks out.

As for Sauter’s, did you know there’s the outline of a horse on the side of Sauter’s truck (tenda is an Equine and Pet Care Products company)? I never noticed it through the first seven months of the season. But it’s there, clear as day in the game. I looked at pictures of the real car and was surprised to see it.

Speaking of paint schemes, there’s new ways to have more in your possession, including existing cars and your own creations.

Added to the usual “challenge” mode (watch out for the Sonoma Raceway “carousel” challenge) is being rewarded with the car from that challenge.

Oddly, this sometimes includes a “Victory Lane” version of the car, so you’ll be driving around the track with a confetti-covered vehicle.

The game creators have also heard cries for enhancements to the custom car builder. 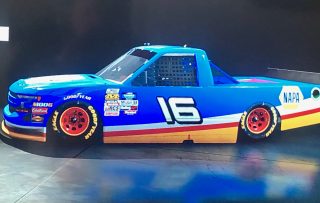 While you unfortunately can’t paint a car at will any way you want, the game gives you significantly more tools to work with.

An addition to the game is the ability to use any number on your custom cars, on top of a wider variety of paint scheme templates and a handful of number fonts.

While I’m not a fan of the number font designs, it’s nice to have more choices, which is the overarching theme of most of new tweaks with NH4.

The combination of new numbers, scheme templates and enhanced color selection allowed me to accidentally back into creating a close imitation of one of Ron Hornaday Jr.’s old NAPA schemes from the Truck Series.