Jimmie Johnson’s Southern 500 throwback is a tribute to a long, strange trip through the desert for the seven-time Cup champion.

The No. 48 Chevrolet is painted for Sunday’s Labor Day weekend classic at Darlington Raceway in the colors of “Butch,” a pickup truck that Johnson drove to several victories in the early to mid-1990s.

But it was a crash during the 1995 Baja 1000 that might be the most memorable moment for “Butch” and Johnson, who fell asleep behind the wheel while leading nearly 900 miles and more than 20 hours into the famed event.

“I woke up in time to realize we were going off the course at a high rate of speed,” Johnson recalled during a 2002 interview. “We hit some rocks and flipped off through the desert. There was a huge mountain range in between the course and the asphalt road. The radio communication didn’t get across to the chase vehicle.”

Though word was relayed back through other competitors, Johnson and his co-driver weren’t reached until the next day. Johnson was sleeping when his rescuers arrived and gave them a bit of a scare.

“The gnats and flies were real bad and I put a rain parka on top of me and took a nap,” said Johnson, who 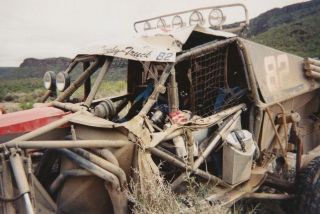 escaped injury with his co-driver in the crash. “When the chase vehicle finally came down the road, my co-rider was sitting on a rock passing the time. When they saw me under the yellow parka, they thought I was dead. I remember hearing somebody screaming and yelling that Jimmie was dead, and I sat up with the parka and it was kind of a funny incident.”

At 20, Johnson was the youngest driver in the Trophy Truck division of the Baja 1000, which he said shaped his driving style by turning him into a thinking man’s racer. The Hendrick Motorsports driver also finished 10th with Butch in the Baja 500, crashed in a Barstow, California, race and finished 13th at Laughlin, Nevada. But Johnson also went airborne for 86 feet with Butch, winning a $7,500 exhibition for the longest jump at the “Laughlin Leap.”

“I’ve always wanted to throwback to the off-road industry,” said Johnson, who moved to asphalt racing and NASCAR in 1998. “Within that, there were probably two or three paint schemes that we had to choose from. For me, and the amount of times I’ve told that Baja 1000 story and the fact that we had the truck and were restoring it, it just felt like the right way to go with it.

“To have all the text messages and phone calls and social media and all my old friends and people that remember that truck, it’s been a very cool experience down memory lane so far.”

“Butch” also was featured in Saturday’s Southern 500 parade after Johnson bought it from a family that had restored the historic truck for use in lower-level desert racing. Larry Ragland raced the truck to several victories, including the 1991 Baja 1000 overall.

Who doesn't love a parade? Ally was excited to participate in this year's Southern 500 parade with the Ally 48 and @JimmieJohnson’s trophy truck from the 90's. pic.twitter.com/098RRraARW

“They gave me a fair price to buy it back because of the sentimental value to it,” Johnson said. “There are still two off-road trucks that I don’t have in my possession that I want, but unfortunately the people that own them really want to make a pretty penny off me.”

The Hendrick Motorsports driver, who is trying to avoid missing the playoffs for the first time in his career, also will be carrying another sentimental touch – an angel patch that his grandmother often sewed on his firesuits in the 1990s.