Simulation racing might have saved Parker Kligerman’s career, and he believes it will jump-start someone else’s.

During the most recent NASCAR on NBC Podcast, Kligerman explained his role in the push behind bringing iRacing and eSports in NASCAR to a broader audience.

The NASCAR on NBC analyst began racing simulation racing at 13, the same year that he entered go-kart racing. When his family lacked the money to keep him in a go kart, Kligerman used sim racing as his path to fulfilling the “10,000 Hour Theory” of practicing enough to become an accomplished driver who has won in ARCA and also driven in NASCAR’s top three national series.

With iRacing’s Peak Series expanding into teams and a driver draft this season, Kligerman said the infrastructure has been built for someone to follow his path but without ever beginning in the real world as he did.

“Now there’s a formal way,” Kligerman said. “You’ll see someone with zero experience in real life find their way to a real car because of what we’re doing here.

“That’s the dream of it all. The biggest problem in motorsports is a massive barrier of entry for people. If you had this great linear feeder to the top (in sim racing), it’s a great thing and would get more people involved.”

He could play a role in that having formed Burton Kligerman ESports with fellow NASCAR on NBC analyst Jeff Burton. The team scored its first victory Tuesday at Darlington Raceway with driver Ashton Crowder, who also will be competing in the iRacing All-Star Race on NASCAR America today at 5 p.m. ET (NBCSN). 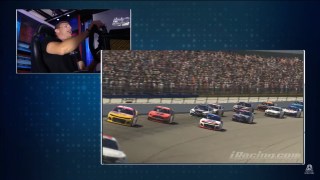 Kligerman also will be competing in the event, which will be held at Rockingham Speedway, through the iRacing simulator in the NASCAR America’s Stamford, Connecticut, studio.

“I fought so hard to be a part of this sport,” Kligerman said on the podcast. “(Sim racing) was the sole connection when I couldn’t drive anything real. I don’t care what walk of life or age, you can potentially be involved in a very high level of motorsports in the future and eventually become a career, a path, a destination. To bring motorsports to the masses, eSports has that ability. The growth been insane for iRacing this year, and the sky’s the limit on what we can achieve, and if we do it right, we can do something that helps the sport in the future.”

Steve Letarte also was a guest on the podcast to discuss the Peak Series team that he formed this season. Letarte’s interest was spurred in part because he was disappointed his daughter was required to know the rules of basketball, baseball and soccer to pass a seventh-grade course – but not racing.

“The best way to grow racing fans is to have them experience racing,” Letarte said. “Both console games and simulation racing have a place to spread that ability much like at a local go-kart track. As a racing community, we all have the obligation to get racing in front of as many young men and women as possible.”

Letarte also talked about being part of the first iRacing broadcast on NASCAR America last month with Burton, Kligerman, Krista Voda and A.J. Allmendinger. The presentation mirrored a NASCAR on NBC broadcast, and Letarte said it also felt like broadcasting a real-world event because of its realism.

“If you took live races and put them in standard definition, you couldn’t tell the difference” from sim racing, he said.

You can listen to the podcast via Apple Podcasts, Stitcher, Google Play, Spotify or by clicking on the embed above.

The second iRacing NASCAR America broadcast from Rockingham Speedway will take place today at 5 p.m. ET on NBCSN. If you can’t catch today’s show on TV, watch online at http:/nascarstream.nbcsports.com. If you plan to stream the show on your laptop or portable device, be sure to have your username and password from your cable/satellite/telco provider handy so your subscription can be verified.

Once you enter that information, you’ll have access to the stream. Click here at 5 p.m. ET to watch live via the stream.