The elder Tifft once owned a Dirt Late Model car that was driven by Hilliker, a Michigan Motorsports Hall of Famer.

Matt Tifft’s No. 36 Ford will be made to look like the No. 21 car Hilliker raced. 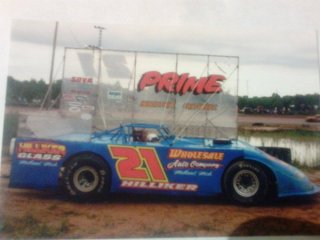 “You could say David Hilliker was my childhood dirt track hero,” Tifft said in a press release.

“I’m really excited to recreate this paint scheme for Darlington. When I was little, my dad would bring home this car in the offseason and we’d tear it down together. That was where I first learned how to work on a race car.”

“My dad has been such a huge influence throughout my career, and I couldn’t have gotten to this point without him. I’m grateful for the opportunity to give him this kind of recognition and can’t wait to see his face when he sees the car in person for the first time.”

Sunday’s race will mark Tifft’s first Cup start at Darlington Raceway. He has two starts there in the Xfinity Series with a best finish of eighth.