It was the first time one team has swept a round this season.

Brandyn Gritton (SHG_HotRod_14p) won for SHR in the PlayStation 4 event, earning his third win of the year.

Below are the final overall point standings – combing both consoles – heading into the four-round playoffs, which begin Sept. 11 on a virtual Las Vegas Motor Speedway. 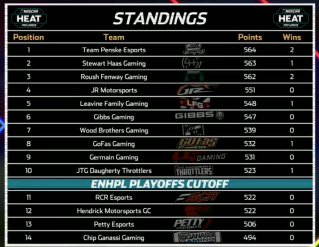 You can watch both races in the below video.