As a racing fan growing up in rural Ohio, Ryan Hines heard the generalizations about intolerance in the testosterone-charged world of motorsports.

But his first-hand experience has been the opposite.

“I think NASCAR gets a generalized and stereotypical outlook that it’s homophobic and hypermasculine and there’s not any room for people who are gay to be in it,” Hines said during the latest episode of the NASCAR on NBC Podcast. “From my experience, it’s really a great community. I’ve met nothing but love and respect from everyone I’ve come across in the sport.

“It’s crazy that growing up I never thought I could be gay and work in NASCAR. I feel a lot of people who may be gay and have aspirations probably have that same mindset that I had growing up. I think it’s important there are role models for those people. Being an example of this guy is gay and is working in NASCAR and able to be himself and do what he loves to do, people being able to see that and know they can do it, too, is a step in the right direction. Having that representation is important.” 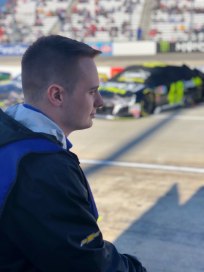 Hines, 23, is a coordinator of Xfinity brand content at Stewart-Haas Racing, where he works primarily with handling Chase Briscoe’s schedule and also handles media requests, video content and the team’s podcast.

He entered the NASCAR industry a week after graduating from Ohio State in May 2018, starting at Hendrick Motorsports. The Pleasant Hill, Ohio, native has been around racing (also working at Eldora Speedway through high school and college) for longer than he began publicly talking about his sexuality.

Hines has been out as a gay man since his junior year of high school and initially was concerned about how that would be perceived by racing co-workers.

“You’re told the stereotype of what racing is, and that fans and people involved aren’t accepting,” he said. “You hear that it’s a ‘redneck’ sport, and you associate Southern redneck roots with homophobia, whether it’s true or not. Now that I’m working in the sport, I see past those stereotypes and generalizations and have come to realize that most people in the sport are average people. They don’t care. They want you to be you. If you are who are to them, they’ll respect you for that.”

Hines said his sexual orientation comes up in casual conversation with other team members and without “anyone reacting negatively to it.” In sharing his story on the podcast, Hines hopes to help make it easier for other gay members of the NASCAR community who are reticent about being comfortable enough to discuss it.

“People don’t realize how much effort it takes to h 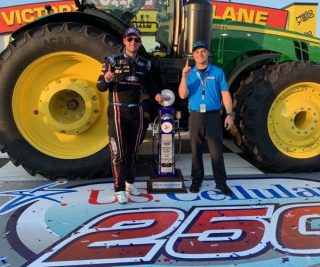 ide,” he said. “It’s exhausting because you have to worry about what you do and say.”

NASCAR has launched many initiatives (most famously its Drive for Diversity) over the last 15 years aimed at increasing its fan base among minorities and women.

As Major League Baseball, the NBA and other pro sports leagues have held gay pride nights that help build audience inclusion, Hines would like to see the same in NASCAR but said it’s also trickier.

“You have to be careful with that because there’s the stereotype of what the fan base is,” he said. “You don’t want to seem opportunistic. Launching a clothing line or holding an initiative, you want it to be genuine. I think NASCAR definitely needs to show they are welcoming, but they are struggling with how they do that and don’t seem opportunistic.”

Hines isn’t the first to discuss being gay in the NASCAR industry, but there have been no high-profile members (such as drivers or crew chiefs). In auto racing, five-time Rolex 24 champion Hurley Haywood is likely the most famous driver to have come out (discussing it in a documentary this year that he talked about as a NASCAR on NBC Podcast guest in April).

Hines believes it would be difficult for a driver to come out, but “I think they could come forward and find a lot of acceptance. You’re always going to have people who will say negative things. You’ll have that in any aspect of life. I’d love to see a driver, crew chief or an engineer come forward and embrace who you are and being truthful and honest. You’ll find a lot more acceptance and respect than you’d ever think you could.

“By and large, most large companies in NASCAR sponsoring in some capacity, they wouldn’t bat an eye as long as you aren’t bringing negative publicity and being authentic to who you are. They won’t have an issue with it. As long as you’re performing and a good ambassador to the brand, I don’t think the sexuality really matters.”

Hines said it is a delicate issue to discuss because he doesn’t want to be viewed as “a huge agent of change.

“I don’t want to be this huge trailblazer and try to take on a huge campaign,” he said. “But it’s important to be open and honest about it. The more people who see it as everyday life, the easier it can be.”

To listen to the podcast, you can click on the embed above or via Apple Podcasts, Spotify, Stitcher, Google Play or wherever you download podcasts.