Popular cartoon character Scooby Doo will be featured as the theme on Corey LaJoie’s No. 32 Go Fas Racing Ford Mustang for the First Data 500 on Oct. 27 at Martinsville Speedway.

Long-time team sponsor Keen Parts/CorvetteParts.net will transform the team’s usual paint scheme to what it’s calling “the Mystery Machine” for the Martinsville race, which will be four days before Halloween.

“Scooby Doo was my favorite cartoon growing up, so when Tom and TJ (team co-sponsors Tom and TJ Keen) asked what I wanted to do for Martinsville, there was no doubt that I wanted to be driving the Mystery Machine,” LaJoie said in a media release. “They always have really cool themes behind their Halloween-weekend schemes and I’m excited to be part of this one and thankful for all that they do for our team.” 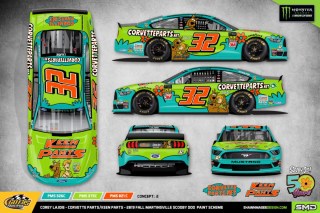 For last year’s fall race at Martinsville the team and sponsor combined for a purple and black Peanuts scheme that featured Snoopy and quickly became a much-talked about fan favorite.

“We are super excited to present this paint scheme to Corey to run at Martinsville,” said lTJ Keen. “This cartoon was his favorite as a kid and I bet it still is today. We cannot thank the team enough for letting us do these schemes and we hope you fans will enjoy it.”