Ford has unveiled the Mustang model that will be raced in the Xfinity Series next year.

The new model will take the place of the Mustang body that’s been used in the Xfinity Series since 2011.

The new model will make its debut in the Feb. 15 race at Daytona International Speedway.

Here’s a comparison between this year’s Mustang and next year’s. 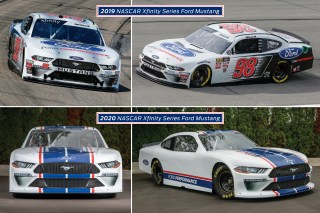