The eSports teams of JTG Daugherty Racing and Leavine Family Racing were the winners Wednesday night in the fifth round of eNASCAR Heat Pro League.

The races were held on a digital Chicagoland Speedway. Justin Brooks (mrTRACKBAR33) won for JTG Daugherty in the Xbox One race. Josh Harbin (ThAbEaR_95) won for Leavine Family Racing in the Playstation 4 race.

Brooks’ win is his second of the season after he won Round 3 on a digital Bristol Motor Speedway.

There are three rounds left until the playoffs begin. The sixth round will be held July 24 on a digital Indianapolis Motor Speedway.

Here are the point standings after five rounds: 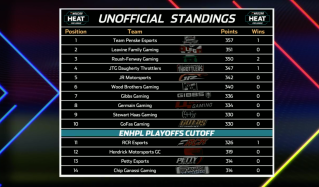 You can watch the full races in the video below.