Chandler Smith turns 17 on June 26, but there’s little doubt the Georgia native is quickly proving he knows how to successfully wheel a race car or race truck.

Just over 12 hours later, Smith made his Gander Outdoors Truck Series debut by starting on the pole (due to being fastest in first practice when second practice and qualifying were both rained out) in the M&Ms 200 race for Kyle Busch Motorsports, led 55 laps and ultimately finished eighth (he may have finished higher if not for a pit road penalty that sent him to the tail end of the field).

So what does the resident of tiny Talking Rock, Georgia — population 69 — do for an encore? Double duty again in both ARCA and Trucks events this weekend at World Wide Technology Raceway at Gateway (formerly Gateway Motorsports Park), that’s what. 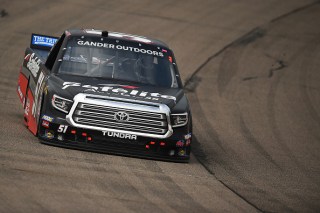 Smith is looking forward to both races, particularly the next step in his evolution with KBM, for whom he’s driving a limited schedule in both Trucks and super late models.

“It’s very humbling to have all of these opportunities on the table and I can pick and choose what pathway I am going to take,” Smith said in a media release. “I am grateful for all of the people around me.

“I have finally gotten to the age and the maturity when I realize this is a big deal. There is no one I know that is my age that has the opportunities I have. I have some bigger opportunities than some Cup drivers right now. I am really trying to stay humble about it.”

Busch has high expectations for the young drivers that pilot his trucks, and Smith is not excluded from that category even with just one start to date.

“I don’t think it adds pressure at all,” Smith said. “When you have drivers that aren’t winning in the very best stuff, he has a valid point. If I don’t do good, I would go up and ask him what I did wrong. I will deserve it. I want to make sure I am aware of what I am doing wrong so I can fix it.”

“I think it’s going to be all mental,” said Smith, who has never been in the St. Louis area and may not know about it’s notorious heat and humidity at times. “You are going to have to want to have the drive to do it. If you are like ‘oh my gosh, I have to do that?’ because if you have that attitude you are going to suck at it.

“I’ve never been to the track before. I know you need to be patient and hit your marks there. There is definitely going to be a big learning curve. I have never raced on a track like that before. I have practiced there a little on the simulator. I have a good bit of laps under me and I have a general idea so when we get there so I will know what to do.”