Brett Moffitt, who crossed the finish line second, was declared the winner and also gets the $50,000 bonus for winning a Triple Truck Challenge race.

Chastain’s truck was found to be too low in the front.

Chastain’s team, Niece Motorsports, announced Sunday afternoon that it would appeal the decision. In a statement from team owner Al Niece, he said that Chastain’s truck “sustained minor damage during the event, which left the truck too low following the race.”

That appeal process will be expedited. Should the team lose that appeal, they cannot appeal the decision any further based on section 14.6.f of the rule book, which states:

Brad Moran, managing director of the Gander Outdoors Truck Series said after the race: “We have a procedures and rules in place, trucks are restricted on their ride heights at the front and rear of the vehicles. Unfortunately, the 44 (Chastain’s truck) was low on the front, extremely low.

“We have a process of what happens at that point. They do get an opportunity to roll around. They put fuel in the vehicle, they air the tires. Give them at least five to 10 minutes. Check them a second time. Unfortunately, the 44 did not rise on the front at all.”

Here is the section in the rule book on ride heights: 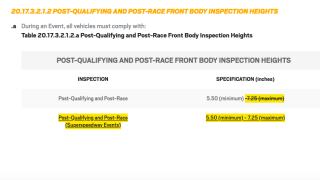 Chastain was a part of Motor Racing Network’s broadcast of the Xfinity race on Sunday and addressed what happened in the Truck race to his team.

“It’s tough,” he said. “It was tough to walk up here (to the radio booth) across the frontstretch and walk by victory lane and where everything has happened, yeah, they took it away from us. It’s an old rule that they stand by and … the lower series of all the divisions still go by ride height rules and Cup Series has gotten away from it but we were just too low. The truck wouldn’t come back up. I’m not sure why. They wouldn’t let us look under the hood or anything. It went through (inspection) before the race.

“In any race car these days … it’s been this way for the last 25 years, the lower you get it, the better it handles. We, as racers and the race teams, our trucks, when we go around the race track are scraping the ground even though our ride height rules (are higher than that). You go through tech pre-race and it has to be up at that predetermined amount.

“As soon as we get into the truck and I come off pit road, every race truck in the field and race car in this Xfinity Series, it falls down on the ground and you race right scraping the ground. That’s why we have splitters and our side skirts are made to wear so that we can handle the bumps and still have the aero platform we want. Then, whenever you come in, you’re supposed to have it where it automatically comes back up. It’s just physics and mechanical parts and something on ours just didn’t push quite hard enough.

“I don’t know what the problem was, but we still won that race. Like you said, we won both stages, we led a ton of laps. It’s still a dream come true, but, yeah, they took it away. It’s kind of ironic now that we’re sitting next to NASCAR (officials) up here in the booth.”

This is Moffitt’s first win of the season and the eighth of his career. Ben Rhodes finished second and Harrison Burton placed third. Moffitt did not lead any of the race’s 200 laps. Chastain led 141. Racing Insights has no record of a winner in NASCAR ever leading zero laps but notes that lead lap information in the 1950s and ’60s is incomplete.

“It’s a big change of emotions and obviously this is not the way I want to win it as a race car driver, I still know I got beat on track, which is frustrating,” Moffitt said. “Back in the beginning of the year when NASCAR implemented this system, it was to clear up the Tuesday disqualifications and the encumbered wins and let the fans know and everyone else know who actually won the race. I’d still would rather take the checkered and be the first one to it, but I’ll take a win anyway I can get it and that solidifies our playoff spot.”

Moffitt said he was on the way to the airport when his team called him and told him to return to the track.

Should Chastain’s team not win the appeal, it could prove devastating to his playoff hopes. He changed what series he scored points in from Xfinity to Trucks on June 4. Chastain needs a victory in the last six regular-season races and be in the top 20 in points to be eligible for the playoffs.

With the disqualification, Chastain is listed as finishing last (32nd) and receives last-place points (five) instead of 60 he would have gotten. He loses all the points (and playoff points) for the win and also loses the stage and playoff points for winning both stages.

Chastain has 43 points. He’s 69 points behind Josh Reaume, who is 20th in the season standings.