Daniel Suarez has a ‘G’ at the end of his Twitter handle – @Daniel_SuarezG – which stands for his other surname of Garza.

But ‘G’ also stands for what Suarez aspires for the remainder of this season – to go from very good to great – as he hopes to take things to the next level beginning with Sunday night’s Coca-Cola 600.

“This season has been very good so far but I’m looking to turn it into a great season,” Suarez said in a media release. “We are moving in the right direction and I’m looking forward to doing even better.

“We’ve had strong cars over the last month and a half and hopefully I can do my part as the driver and make it a great race this weekend. The one thing I’ve been dreaming about from this race is the amazing vintage Coca-Cola vending machine you get if you win. I really want to bring that thing to my house.”

In addition to his pursuit of the vintage Coca-Cola vending machine, Suarez will carry a special Coca-Cola paint scheme on his No. 41 Stewart-Haas Racing Ford Mustang this weekend, as he makes his third appearance in the 600.

He finished 11th in his first run in NASCAR’s longest race of the season in 2017, and was 15th in last year’s race. He also was sixth in the fall 2017 playoff race. 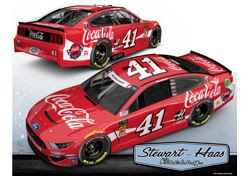 From an overall success standpoint so far in 2019, Suarez has one top-five and four top-10s in the first 12 races, with a best showing of third at Texas. He also has seven top-15 finishes in his last eight starts, and comes into this weekend ranked 13th in the Cup standings.

Suarez is still looking to earn his first Cup win. Sunday will mark his 85th career Cup start. He knows what is at stake in the 600, an event that is scheduled for 400 laps around the 1.5-mile Charlotte Motor Speedway.

“As a human being you try and perform at 100% the entire time, but when you’re running a marathon you’re not going to be as strong in the last 30 minutes, that’s normal,” Suarez said. “Fatigue is setting in, your muscles are tired, you’re running out of fluid, and you’re hungry.

“Racing is the same way, especially in the Coca-Cola 600. We start running out of energy and you’re mind gets tired after four hours of racing. But I look to this race as a marathon and you have to be on top of your game for the last part of this race. So I always try to keep that in my mind when I’m in the car. This isn’t a sprint, it’s a marathon.

“It’s a combination of things. Your neck is tired, your lower back is tired, legs are tired and you’re just fatigued. You definitely feel it the next morning after a 600-mile race. You feel like you worked out a lot the day before, and you did inside the car.

One way Suarez will get through Sunday’s four-wheel marathon is to maintain a rather unique mindset.

“Two-and-a-half of these 600-mile races and I could be home in Monterrey, Mexico,” he said. “It’s crazy to think of it that way.”