For the first 15 years or so of his high-profile NASCAR career, Dale Earnhardt Jr. had a secret that he kept from fans, media and sponsors.

But most importantly he kept it from his father.

There had been times that Dale Earnhardt had entered his son’s house unannounced and seen the ashtrays full of cigarette butts.

And while his mother, uncle and grandparents also indulged in smoking, Earnhardt’s seven-time champion father didn’t, nor did he approve of it.

“When I was a kid, everyone seemed to be smoking except for dad for whatever reason. He just never did,” Earnhardt Jr. told NBCSports.com in a phone interview Tuesday morning during a round of media appearances in which he spoke about his former habit in-depth publicly for the first time. “He knew I did, and I never, ever would have let him see me holding a cigarette. He hated it. We never had a conversation about it. He might have said a few times, ‘You need to effing quit that.’ Or something like that real short.

“I know that was something that extremely disappointed him.”

Ultimately, it was another family member who helped Earnhardt Jr. snap the habit about eight years ago.

Earnhardt’s wife, Amy, put up with his smoking the first few months after they began dating.

“She said, ‘Yeah, if you’re not sure, and this is something that is going to be part of our relationship going forward, I just don’t know. So that was a tough conversation that had to be had, and I finally figured out how to get it out of my system when I truly wanted to quit. You have to have that conviction to do it, but it was really, really hard.” 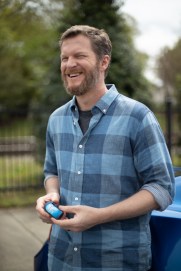 Earnhardt, who just launched a video campaign with Nicorette to help promote its new coated ice mint lozenge that helps smokers quit, said he wanted to help be a coach on the journey for other people trying to quit.

“I figured it wasn’t a super-duper secret that I was a smoker, but maybe it might be worth exposing that little lie and secret to see if I can convince other people to quit because honestly, once I decided to quit, I didn’t realize all the things that smoking was affecting in my life,” he said. “And I was super insecure about it.

“Obviously I didn’t want anybody to know about it, but I worried about whether my car smelled, my clothes smelled, my breath smelled, and then I worried about my long-term health. I had a doctor that’s pretty straightforward, and he’s hammering on me all the time that, ‘Like, dude, you’ve got to quit.’ I seemed to get a lot of sore throats and a lot of colds more frequently than other people that weren’t smokers.

In addition to feeling much healthier, Earnhardt said it changed him for the better socially as well.

“I realized how much control (smoking) had over me,” said the NASCAR on NBC analyst, who also has been open about the impact Amy and Steve Letarte had on him getting out more. “The decisions I made every day were based around smoking. It sort of encouraged that hermit mentality that I had before me and Amy met. Where I wouldn’t go anywhere, do anything. You wouldn’t hardly see me leave the bus on a race weekend. I would shorten visits with family on holidays and just avoid activity.

“I’d just sit in the house and play video games because I could smoke. Then I realized once I got done how much that was dictating my day and predicting the choices I made every day. It was all based around my habit of smoking, and that’s pretty stupid, but it’s true.”

Earnhardt said he picked up smoking in his early 20s, just before he began running in the Xfinity Series, while being around friends who did it.

He hid the vice in public because of the worries about his persona (which already had been associated in his youth with wild partying at the “Club E” makeshift nightclub in his basement). While NASCAR also was affiliated with tobacco through having R.J. Reynolds as the title sponsor of its top series for more than 30 years, Earnhardt said there was a “negative stigma that was building” about smoking when he took it up.

“It wasn’t popular, cool or trendy,” he said. “I wasn’t so much worried about sponsors as just worried about disappointing people. I just tried not to really push it in front of anyone’s face. I wouldn’t walk up and down pit road holding a cigarette. I just thought that would be a mess.

“People would be like, ‘What the hell are you doing? Get your head on straight. You’re supposed to be this race car driver,’ and I already had people questioning my focus and my determination. If I’m walking around smoking a cigarette on Saturday between practices, I’m sure that was going to just feed into that.”