As a sponsor that has invested eight figures annually for 14 seasons in NASCAR’s premier series. FedEx has spent well more than nine figures promoting its brand.

But for all those millions spent, the amount of exposure has stretched above 10 figures annually.

In the most recent NASCAR on NBC Podcast, which highlights the sponsor’s long-term relationship with Denny Hamlin and Joe Gibbs Racing, a FedEx executive shared a few interesting nuggets about how it tracks the efficacy of its NASCAR involvement.

“We measure it very closely, and we have more than a billion brand impressions generated from the No. 11 sponsorship each year,” said Patrick Fitzgerald, the senior vice president of integrated marketing and communications for FedEx. “It’s one of the reasons it’s important for us to be the sole sponsor of the No. 11 car.”

After selling off a few of its races last year, FedEx will adorn Hamlin’s No. 11 in every race during the 2019 season to gather those impressions, which Fitzgerald said cover myriad categories.

“It’s across everything,” Fitzgerald said. “Eyes on the brand at track, on broadcasts, on digital. Every place we’re able to activate the sponsorship” 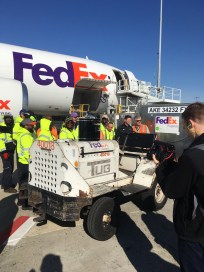 Though the delivery and logistics company sponsors many sports globally (including golf, the NFL, international soccer and the NBA), its most visible spokesman is Hamlin, who scored his second Daytona 500 victory in February. The JGR driver has 33 victories with FedEx since 2006.

“He’s become a genuine extension of our brand and a real brand ambassador, and we’re proud of that,” Fitzgerald said. “He certainly understands our culture and business. He takes the time with customers and team members and does understand our business and what we represent and why it’s so powerful to have a long connection with the company and the brand.

“A lot of that can be credited to Coach Gibbs. Denny over time has watched and learned from the interaction with our brand and company. There’s no greater ambassador in sports for the FedEx brand than Coach Gibbs. That’s something that Denny has picked up from him and is a big part of it.”

FedEx also measures revenue generated through the business relationships fostered through NASCAR. More than 1,600 of its customers are entertained annually at NASCAR races by the company, which also considers the value of brand awareness.

“The overall mix, we get a lot of value,” Fitzgerald said. “NASCAR is a great example of the evolving media landscape. For example, with the advent of DVRs and other technologies that change the overall effectiveness of traditional broadcast advertising, the exposure you get from a race, which is DVR proof, you get tremendous brand value just being on that car lap after lap, race after race, and then in particular when Denny does something like amazing like winning the Daytona 500.

“When we host a customer at an event, we look at shipping volumes before and after, you can start to draw some conclusions of the effectiveness as a revenue generator. We looked at that closely.”

The special narrative edition of the podcast followed Hamlin on a trip to the sponsor’s headquarters in Memphis, Tennessee, and included reflections by the driver on the origins of aligning with FedEx and what the future might hold

Hamlin, who will turn 39 in November, signed a multiyear extension with FedEx in 2017 and would like to lay claim to having only one sponsor through the end of his NASCAR career.

“I’d like to do one more contract beyond what I have,” he said. “What I have is long term. We’re not even in the middle of that yet. So I’d like to be here.

“It’s so rare. We thought Jimmie (Johnson) would finish (his career) with Lowe’s. I think there’s something to be said about that. To have someone who is with you from the start to the finish. It’s all about dollars and sense and whether you can make things work, but I’m with the company I believe in and hopefully believes in me through the course of my career. I’d like to go at least 43-ish.”

To listen to the podcast, you can click on the embed above, or listen via Spotify, Apple Podcasts, Stitcher, Google Play or wherever you download podcasts.