While the top speed in Saturday’s final Cup practice at Dover International Speedway was more than 4 mph slower than Chase Elliott’s track record set in Friday’s qualifying, that’s likely not going to mean much in Sunday’s race.

Any way you slice it, the race is going to be fast-fast-fast. If on-track incidents are kept to a minimum, it could be one of the fastest races at the 1-mile concrete oval.

“Nobody is going to slow down,” Martin Truex Jr. said after Saturday’s final Cup practice. “Everyone is going to go as fast as they can. This series is tough. In order to be up front, you have to push.

“It is going to be a tough race for sure. Hopefully, our car stays good and we can get it even a little better and we can go and have some fun.”

Truex has a special affinity for Dover. Not only is it the “home track” for the driver from nearby Mayetta, New Jersey, it’s also the site of his first career Cup win in 2007. He also won there in the 2017 fall playoff race. 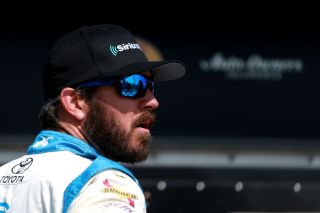 “It’s a great place and such a unique race track,” Truex said. “One of my favorites to come to for sure. It’s called the Monster for a reason, it’s mean and it’s fast and it’s big. It’s kind of crazy.“

Jimmie Johnson is also looking forward to a return to Dover, which is his most successful track, with a record 11 wins there. But Dover is also the site of his last Cup win, which was in June 2017, leaving him in the midst of a 69-race winless streak, the longest of his Cup career.

“It’s amazing how fast we are going after 15-20 laps still,” Johnson said after Saturday’s Happy Hour. “There is not much drop off. There is a lot of drop off when you get to a pack of cars in front of you.

“I think that tall spoiler gives us a lot of confidence by ourselves, but in traffic I think we are going to have less available air and some issues there.”

Since his last win at Dover, Johnson has finished third, ninth and 36th there. While he’s downplaying any urgency of breaking his winless streak, it’s also clear that Johnson knows the best place to reach victory lane for the 84th time in his Cup career is at Dover.

“Maybe I am a fool, but just every time I come here, I feel like this,” Johnson said of winning at Dover. “This is just one of those places that an athlete finds a bond with a facility or a venue that they connect with.

“I don’t care if I have only three wheels on that thing, I still feel like I would have a shot to win. I just love this place.”

With the new aero package and the lightning-fast speeds seen, Johnson plans on being aggressive right from the green flag.

“I think it’s the same that we have seen for a long, long time, just at a faster pace,” he said. “Pit stops, track position, good restarts – all those core values are still as important as ever.

“And maybe even more important now with the big hole the cars punch in the air. All of that stuff is more of a premium, I think. You can’t really be patient.”

Truex agrees that aggressiveness will be key Sunday, but he’s also concerned about the balance of his car, which has long been a thorn in his side at Dover. But this time, the balance issue will be extrapolated because of the higher speeds.

“It has always been a tough place to get the balance right,” Truex said. “That is why you see guys here that just blister the field and that is why sometimes even good cars just miss it.

“It is very, very unforgiving to setups to cars that don’t handle as well to guys that maybe don’t like it, things like that. It is a very sensitive race track. You have to attack, but you have to attack with finesse. It is a lot of fun.”

FORT WORTH, Texas — The NASCAR garage is sharing its prayers for Stewart-Haas Racing engineer DJ VanderLey, who was injured Thursday night in a crash during a micro sprint Outlaw race at the Texas Motor Speedway dirt track.

He suffered several fractured vertebrae and has a spinal cord injury, according to a post from his wife Jordan on her Facebook page.

Two GoFundMe accounts have been set up to help the family with medical costs.

VanderLey was Chase Briscoe’s engineer for four years, and they are good friends.

“I hate that it happened to anybody,” Briscoe said Saturday at Texas Motor Speedway, “but for it to hit close to home has definitely been tough for me.”

Briscoe said he planned to visit VanderLey in the hospital on Saturday and that “I just hope that everybody continues to pray. That’s really all we can do at this point, trying to hope he gets better.”

Bell spent the night at the hospital and also picked up Jordan VanderLey at the airport when she arrived.

Stewart-Haas Racing had a decal for VanderLey on Riley Herbst‘s No. 98 Xfinity car for Saturday’s race.

This weekend we race for DJ VanderLey, our No. 98 race engineer who was injured in a racing accident this week.

Our thoughts and prayers are with him and his family. pic.twitter.com/xfeJ8L1OtE

Also starting in the top five Sunday will be William Byron, Tyler Reddick and Michael McDowell. It is McDowell’s best oval start of the season and his ninth top-10 start of the year.