Gearing up to celebrate its 50th anniversary during the NASCAR triple-header weekend May 3-5, Dover International Speedway has unveiled a new video celebrating its golden jubilee.

The 14-minute video, which includes interviews with three NASCAR champions talking about their experience at The Monster Mile, offers some of the biggest highlights from five decades of action at the 1-mile concrete oval about 90 miles south of Philadelphia.

Among elements in the video (click here to view): 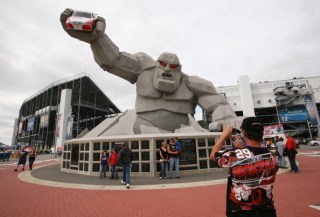 “We’re proud of the Monster Mile’s place in auto racing history and its role as an economic driver for Delaware,” said Mike Tatoian, Dover International Speedway’s president and CEO. “We appreciate Bobby, Jimmie and Richard taking the time to sit down with us and relive their Dover memories. We loved taking a walk down Memory (Victory) Lane with them.”