The rule is not new and NASCAR has made it clear that it is not going to get into judgment calls on such matters. So when Chase Elliott beat Ryan Blaney to the start/finish line to begin Sunday’s Cup race at ISM Raceway, it was an easy call for NASCAR to penalize Elliott for jumping the start.

“It’s a black-and-white call in letting the leader who has earned the pole to be the first to cross the start/finish line,” said Steve O’Donnell, NASCAR’s chief racing development officer, on SiriusXM NASCAR Radio’s “The Morning Drive” on Monday. 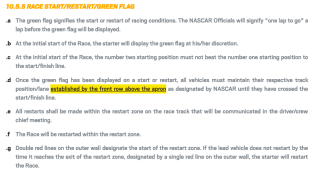 O’Donnell said he talked with Elliott after the race. He said Elliott noted that Blaney spun his tires.

“We have tried to get out of making those calls,” O’Donnell said of judging who spun their tires. “We were in those calls before, who spun their tires, when they spun the tires and what happened and elected to just make it a black-and-white rule. Never a call you want to make but in this case, by the look on the track and the timing loop, one we had to make.”

Elliott’s penalty was to pass through pit road. The penalty dropped Elliott to last in the 36-car field at the time. He finished 14th.

Hey @TheMikeBagley & @PPistone … for your @SiriusXMNASCAR listeners: Here is 2000 #NASCAR Winston Cup Rule Book. Check out Section 10.2 … No. 2 starter couldn’t beat No. 1 starter at the beginning of the race even back then. pic.twitter.com/qpQo0D0YQe

Sunday will mark a difficult crossroads for NASCAR. As several of its top drivers express serious concerns about safety, the Cup Series is at Talladega Superspeedway, the circuit’s biggest track and site of many massive wrecks over its 53 years of existence.

Adding to the tension is the fact that Sunday’s 188-lap, 500-mile race is the middle event in the second round of the playoffs. With a win automatically advancing any of the 12 playoff drivers to the next round, the final laps are likely to be frantic.

Below the cutline are Austin Cindric, William Byron, Christopher Bell and Alex Bowman. Byron fell below the line this week when NASCAR penalized him for bumping Hamlin under caution during last Sunday’s race at Texas Motor Speedway. Hendrick Motorsports has appealed the penalty.

Bowman will miss Sunday’s race because of concussion-like symptoms he has experienced after a crash at Texas. Noah Gragson will replace him.

START: The command to start engines will be given by Jimmy Rane, president of Great Southern Wood Preserving, at 1:52 p.m. (ET). … Green flag is scheduled to wave at 2:04 p.m.

Alex Bowman sitting out Talladega because of concussion-like symptoms