Like a Phoenix rising from the ashes, “The Rock” – a.k.a. North Carolina Speedway and Rockingham Speedway – is once again coming back, albeit in a reinvented form.

In presenting his recommended long-term budget covering 2019 through 2021, North Carolina Governor Ray Cooper has proposed the state give $8 million for capital improvements for what will be known as “The Rock Speedway and Entertainment Complex.”

The money will go towards upgrading the Speedway and its grounds, as well as the adjacent Rockingham Dragway — a combined space of 550 acres and 10.5 million square feet — into what Cooper calls a “world class events venue and (to) attract additional investment and visitation to south central North Carolina.”

Among events planned for the entertainment venue are concerts, fairs, festivals and more.

According to Cooper’s budget, the state’s $8 million investment will result in needed infrastructure improvements including “wastewater and water extension, a pedestrian bridge, repaving the speedway, upgrades to speedway facilities and dragway, bathrooms, and Grandstand repairs/erosion control.”

The budget also requires that for every $3 that the state invests, there must be an additional $1 non-state match to round out the funding for the overall $11.45 million project. That non-state match will likely come from a variety of sources including Speedway owner Dan Lovenheim, who purchased the facility last year from BK Rock Holdings, Dragway owner Steve Earwood, and Richmond and Moore counties.

While Rockingham Dragway remains an active motorsports venue with a full slate of drag racing and other events throughout he year, “The Rock” last saw major on-track action in 2012 when it hosted a NASCAR Gander Outdoors Truck Series event.

Shortly after acquiring the Speedway, Lovenheim told SiriusXM NASCAR Radio several months ago about racing returning to The Rock, “At this early juncture, all doors and paths are open and on the table. We are in discussions with NASCAR. We are in discussion for several events. At this point, unfortunately, I cannot be specific for what, when and how.”

However, Lovenheim added, “I can say that racing will be an integral part of the Rock Entertainment Complex’s future.” 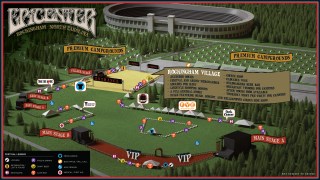 The area is preparing for one of the biggest events it has ever hosted, the Epicenter, a three-day music festival on Mother’s Day weekend, May 10-12, at the Rockingham Festival Grounds, spread across both the dragway and speedway properties.

70 bands are expected to perform. Among headliners for the show, which is expected to draw as many as 110,000 fans and bring a $40 million infusion into the local economy for hotels, restaurants and the like, are Foo Fighters, Judas Priest, Korn, Evanescence, Tool, Bush and Rob Zombie.

Richmond County economic development officer Martie Butler told ThePilot.com, “So many people recognize ‘The Rock.’ It is a very iconic fixture, but a lot of companies have left our region. We look at this as a phoenix approach. Here we have this massive NASCAR fixture and it is a reinvention of this great icon.”